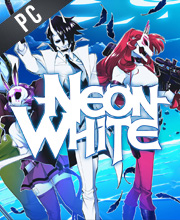 What is Neon White CD key?

It's a digital key that allows you to download Neon White directly to PC from the official Platforms.

How can I find the best prices for Neon White CD keys?

Allkeyshop.com compares the cheapest prices of Neon White on the digital downloads market to find the best sales and discount codes on trusted stores.

Neon White is a love letter to turn-of-the-decade internet weirdos. It’s full of rule-of-cool anime nostalgia, ear-shredding electronic music, and dialogue ripped straight out of my group chats. It’s a genuine game made for an audience rarely prioritised, but even if you don’t fit the archetypical person this game was made for, you’re still in for the most stylish and satisfying action-platformer I’ve ever experienced.

Neon White achieves everything it sets out to with remarkable success. Not only is it one of the most entertaining experiences I’ve played in years, but it also speaks to a highly specific audience many just don’t anymore. It’s for weirdos, misfits, and dorks. Neon White is one of the best games of the year, and it’d be a colossal mistake not to check it out…If you’re able, we highly recommend playing on PC – particularly with a mouse.

EU STEAM CD KEY: Requires an EUROPEAN IP address or you must activate it with a VPN (Virtual Private Network) in order to play Neon White. Might have languages restrictions or language packs. Read the description on the store game page to know if the EU IP is only needed for activation or for playing also (maybe on EU Servers). Most of the stores offer you their help, or show you how to do this with a tutorial to follow.
EUROPEAN STEAM GIFT : It’s a steam gift for Europe which requires an European IP address to activate and to play Neon White on Steam. Read carefully the store description about region and language restrictions.
STEAM GIFT : A Steam gift is a one-time transfer you receive. You activate and install Neon White to play on Steam, it is a non-refundable game that stays in your Steam games collection. Please read the store description about any language or region restrictions.
STEAM CD KEY : Use the Steam Key Code on Steam Platform to download and play Neon White. You must login to your Steam Account or create one for free. Download the (Steam Client HERE). Then once you login, click Add a Game (located in the bottom Left corner) -> Activate a Product on Steam. There type in your CD Key and the game will be activated and added to your Steam account game library.
STEAM KEY ROW : It means for Rest Of the World countries which are not concerned by the region restrictions. This product can't be purchased and activated in Several countries. Please read the store description to know the full list of countries which are concerned. Use the key to Download and play Neon White on Steam.
Standard Edition
Compare Choose & Buy Download (689)