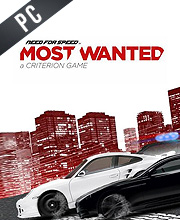 What is Need For Speed NFS Most Wanted CD key?

It's a digital key that allows you to download Need For Speed NFS Most Wanted directly to PC from the official Platforms.

How can I find the best prices for Need For Speed NFS Most Wanted CD keys?

Allkeyshop.com compares the cheapest prices of Need For Speed NFS Most Wanted on the digital downloads market to find the best sales and discount codes on trusted stores.

Need for Speed: Most Wanted is a racing videogame. The 19th game in Electronic Arts‘ Need for Speed franchise and was developed by Criterion Games.

The game is a re-imagining of the original Need for Speed: Most Wanted released way back, except it is designed from Criterion’s point of view. It runs on a modified version of Criterion’s Chameleon game engine.

This game combines the thrill of illegal street racing and tuner customization with the intensity of strategic police pursuits that rivals any Hollywood-style chase scene, Need for Speed Most Wanted challenges players to become the most notorious and elusive street racer.

Players are given Speed Points (SP) upon completing events, performing stunts and beating a friend’s Autolog record. Your goal is to continue earning Speed Points in order to become the Most Wanted racer. Vehicles are also upgradable with performance parts. It features a great open world experience where drivers can tune their cars to compete against any class of vehicles or use their wits to out-fox the law to satisfy their need for speed.

Need for Speed Most Wanted delivers a unique, fast-paced and gripping ride in the racing genre as players build up their Rap Sheet and street cred to move their way up the Black List to become the most wanted racer on the streets.

Fantastic gameplay variety, and stunning graphics make this a worthwhile investment for your PC.

One of the best NFS Games ever <3 i loved to play it back in the Days.

awesome drive game try this you cant disappointed that!

pretty sweet game, if you are into racing. This is the game for youuu 🙂

The best drive and race game…and the best prince only with allkey!