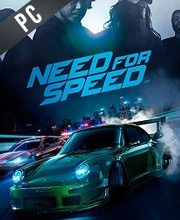 It's a digital key that allows you to download Need for Speed 2015 directly to PC from the official Platforms.

How can I find the best prices for Need for Speed 2015 CD keys?

Allkeyshop.com compares the cheapest prices of Need for Speed 2015 on the digital downloads market to find the best sales and discount codes on trusted stores.

Need For Speed, Version 2015, is a race car video game, developed by Ghost Games and published by Electronic Arts.

The game goes back to its beginnings based on the remarks of it’s fans and the studio has succeeded to recreate the atmosphere of the first games in the series from which it derives its success.

Ghost Games has designed a large map, inspired in part by Los Angeles, a tortuous city, richly decorated which you can leave at will to go squealing your tires in local hills, drifting in sessions that will remind many Need For Speed Carbon.

The latter has also been a major inspiration of the title and it shows when we realize the importance of drift in the game. What is certain is that this new city is frankly very nice and it allows you the pleasure to drive faster than 200 km / h and cornering with a handbrake all while you mock police officers stationed around. Another innovation concerns the history and missions of races given by actors, for realism even when the interaction with the different protagonists.

This realism is also found in the sets and cars, giving their appearance ” kinematics “. The game itself will be based on a principle of points to win in five disciplines, ranging from driving and the lack of respect for the police and characterize by the way you play.

Regarding the pure conduct, the developers have provided a choice of conduct “drift” or “grip”, whether for frenzied excesses or driving in pure speed, there’s something for everyone. Moreover, a lot of work has been provided at the tuning (which is one of the disciplines and not without reason) as the possibilities were pushed to the extreme for your enjoyment of having the car of your dreams.

A title that comes with wisdom to it’s deserved success from the start and benefiting from the experience of its elders to fulfill the wishes of it’s fans, it’s time to move on to the race without hesitation.

This game is good, with nice graphics and ok gameplay/story

This game is absolutely beautiful with its graphics and realism .

Worst console port I’ve ever played since Assasin’s Creed 3 in my entire life. If you are planning to play this game on PC without gamepad you might as well throw your money into the dirt. The graphics are acceptable (by far not as good as I expected) and the car handling is absolutely horrible. After the first two races and countless unskippable cutscenes, you finally get to customize your vehicles control behavior. You can choose between Drift and Grip but your car still drives like either a tank or a soap with wheels. Not to mention the infinite amount of notification windows popping up making you crash your car or the endless phone calls who try to piss you off.

As people complain because it’s not remake of underground, this need for speed has its own qualities which made game perfect imo, really realistic graphics with a lot of cars and open world city. What’s there not to love