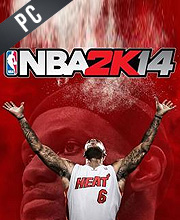 It's a digital key that allows you to download NBA 2K14 directly to PC from the official Platforms.

How can I find the best prices for NBA 2K14 CD keys?

Allkeyshop.com compares the cheapest prices of NBA 2K14 on the digital downloads market to find the best sales and discount codes on trusted stores.

NBA 2K14 is a sports game (specifically basketball) developed by Visual Concepts and published by 2K Sports. The game features LeBron James of Miami Heat as its cover athlete. It is the successor of NBA 2K13 and is the 15th installment in the NBA 2K series.

The game promises fans the best basketball gaming experience through its superb features and exclusive content. Euroleague, which is exclusive to NBA 2K14, allows players to play with 14 of the top European teams, complete with authentic uniforms and players. Dynamic Living Rosters (powered by Stas, Inc.) also gives players automatic updates on player attributes and tendencies which are based on each game played in the NBA in real life. The game’s intuitive Pro Stick allows players to show-off their basketball moves and pull of intricate shots, flashy no-look passes, and more. Also, with the 2K Smart Play Button, players get to quickly call the most suitable play simply by holding a button.

Along with its improved Player Motion System and Depth of Content, NBA 2K14 is definitely an NBA fan’s go-to game which will give you the adrenaline rush you’re craving for.

EU STEAM CD KEY: Requires an EUROPEAN IP address or you must activate it with a VPN (Virtual Private Network) in order to play NBA 2K14. Might have languages restrictions or language packs. Read the description on the store game page to know if the EU IP is only needed for activation or for playing also (maybe on EU Servers). Most of the stores offer you their help, or show you how to do this with a tutorial to follow.
STEAM CD KEY : Use the Steam Key Code on Steam Platform to download and play NBA 2K14. You must login to your Steam Account or create one for free. Download the (Steam Client HERE). Then once you login, click Add a Game (located in the bottom Left corner) -> Activate a Product on Steam. There type in your CD Key and the game will be activated and added to your Steam account game library.
Standard Edition
Compare Choose & Buy Download (743)

This was my very first basketball game and.. It got me so addicted, even though I’m so bad!
It’s one of the most entertaining sport games I’ve ever played, though.

best basketball gaming experience for legions of sports fan and gamers around the world.