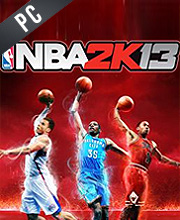 It's a digital key that allows you to download NBA 2K13 directly to PC from the official Platforms.

How can I find the best prices for NBA 2K13 CD keys?

Allkeyshop.com compares the cheapest prices of NBA 2K13 on the digital downloads market to find the best sales and discount codes on trusted stores.

The fourteenth release in the franchise history, it has been the most popular NBA video game in recent years, and is the first to feature multiple players on the cover – Kevin Durant of the Oklahoma City Thunder, Blake Griffin of the Los Angeles Clippers, and Derrick Rose of the Chicago Bulls. Additional features include: current and past NBA superstars, dynamic shot generation, signature skills, a revamped passing system and more.

Featuring an enhanced MyCAREER mode and all-new gameplay features, NBA 2K13 will let gamers pit the best players in NBA history against the new dynasty of talent, including the much-debated match up between the 2012 U.S. Men’s National Team and the 1992 “Dream Team.”

Zoom 1m 3m 1y All
Track product
PUBLISHER WEBSITE CD KEY: Use the CD Key Code to download directly on the Official Website or from the store to play NBA 2K13. Follow the instructions given by the store. Verify languages available and possible region restrictions before buying.
EU STEAM CD KEY: Requires an EUROPEAN IP address or you must activate it with a VPN (Virtual Private Network) in order to play NBA 2K13. Might have languages restrictions or language packs. Read the description on the store game page to know if the EU IP is only needed for activation or for playing also (maybe on EU Servers). Most of the stores offer you their help, or show you how to do this with a tutorial to follow.
STEAM GIFT : A Steam gift is a one-time transfer you receive. You activate and install NBA 2K13 to play on Steam, it is a non-refundable game that stays in your Steam games collection. Please read the store description about any language or region restrictions.
STEAM CD KEY : Use the Steam Key Code on Steam Platform to download and play NBA 2K13. You must login to your Steam Account or create one for free. Download the (Steam Client HERE). Then once you login, click Add a Game (located in the bottom Left corner) -> Activate a Product on Steam. There type in your CD Key and the game will be activated and added to your Steam account game library.
Standard Edition
Compare Choose & Buy Download (743)

If you love retrogaming this title is so cheap that worth a try.

Cheapest offer for this game is on Gamivo, even though it’s not shown here
https://www.gamivo.com/product/nba-2k13

Thanks for that, i have let the team know we will add it asap.

Great game great price! game is ton of fun i recommend it!