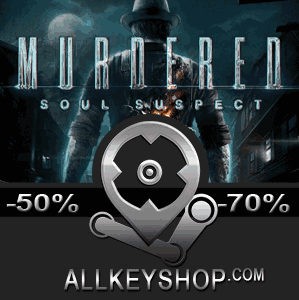 It's a digital key that allows you to download Murdered Soul Suspect directly to PC from the official Platforms.

How can I find the best prices for Murdered Soul Suspect CD keys?

Allkeyshop.com compares the cheapest prices of Murdered Soul Suspect on the digital downloads market to find the best sales and discount codes on trusted stores.

Murdered Soul Suspect is an is an adventure, action, RPG, stealth video game developed by Airtight Games and published by Square Enix.

Solve the hardest murder case in history, that is your own murder! Murdered: Soul Suspect is a thrilling detective game, where you play as Ronan O’ Conner who was following his leads on a killer named “The Bell Killer” he gets killed with an altercation with the murderer. He then wakes up as a spirit, quite confused his deceased wife Julia shows up and informs him that he can only move on if he no longer has any attachments to the human world. He then would need to solve the mystery of who killed him.

Follow Ronan in a third person view. Navigate though the fictitious version of the town of Salem. There are a lot of locations to explore like a graveyard, an apartment and a church. During your journey there will be a lot of items to collect. Also, since you are a ghost you will have supernatural powers to use in your investigation. You are able to teleport or walk through walls, use your possession skills and be able to read the minds of the people around you. You can also interrogate the dead to help you with your investigation.

Help Ronan move on to the light, figure out who the Bell Killer is!

EU STEAM CD KEY: Requires an EUROPEAN IP address or you must activate it with a VPN (Virtual Private Network) in order to play Murdered Soul Suspect. Might have languages restrictions or language packs. Read the description on the store game page to know if the EU IP is only needed for activation or for playing also (maybe on EU Servers). Most of the stores offer you their help, or show you how to do this with a tutorial to follow.
STEAM CD KEY : Use the Steam Key Code on Steam Platform to download and play Murdered Soul Suspect. You must login to your Steam Account or create one for free. Download the (Steam Client HERE). Then once you login, click Add a Game (located in the bottom Left corner) -> Activate a Product on Steam. There type in your CD Key and the game will be activated and added to your Steam account game library.
Special Edition
Standard Edition
Compare Choose & Buy Download (583)

Great game, good Story!, Fun to play! And now because allkeyshop i well get it for lowest price! yeY!

a verry nice game with good graphics,good story and gameplay,i don’t give 5/5 due to a bug that made my repeat the same mission 4 times in order to complete it 🙂

Great game, good Story!, Fun to play! And now because allkeyshop i well get it for lowest price! yeY!