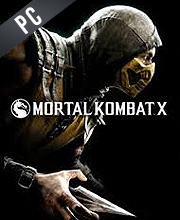 It's a digital key that allows you to download Mortal Kombat X directly to PC from the official Platforms.

How can I find the best prices for Mortal Kombat X CD keys?

Allkeyshop.com compares the cheapest prices of Mortal Kombat X on the digital downloads market to find the best sales and discount codes on trusted stores.

The story begins in 2036, 25 years after the Mortal Kombat 9. So you can find the descendants and heirs of the many characters in the series.

MKX has different game modes: story mode and traditional modes such as the Tower of challenges. The game shows a lot of innovations and is full of surprises.

The Tower of challenges involves a succession of hundreds of challenges to earn points to buy upgrades such as suits, music or artworks.

The game is now divided into three parts:

Quick Tower: The easiest way to those who want a little challenge The Daily Tower: It will be renewed every day, it is more difficult than the Quick Tower. The First Tower: The hardest! It will be updated weekly and contains events organized by developers.

You can now explore these challenges with the character of your choice.

A new mode makes its appearance, it is called Faction Wars. It includes five factions that players can join. Everything you do in the game earns points to your faction. Each week, the faction that has the highest number of points wins bonuses. The score is reset when the winner is established. The game has a lot of new information to fill an already rich title.

This game is the best the series has known, not to be missed under any circumstances!

Bonus: Mortal Kombat X + Goro DLC PC GAME (Can be different or change over time for each seller. Please refer to the seller’s website)

EU STEAM CD KEY: Requires an EUROPEAN IP address or you must activate it with a VPN (Virtual Private Network) in order to play Mortal Kombat X. Might have languages restrictions or language packs. Read the description on the store game page to know if the EU IP is only needed for activation or for playing also (maybe on EU Servers). Most of the stores offer you their help, or show you how to do this with a tutorial to follow.
STEAM CD KEY : Use the Steam Key Code on Steam Platform to download and play Mortal Kombat X. You must login to your Steam Account or create one for free. Download the (Steam Client HERE). Then once you login, click Add a Game (located in the bottom Left corner) -> Activate a Product on Steam. There type in your CD Key and the game will be activated and added to your Steam account game library.
STEAM KEY ROW : It means for Rest Of the World countries which are not concerned by the region restrictions. This product can't be purchased and activated in Several countries. Please read the store description to know the full list of countries which are concerned. Use the key to Download and play Mortal Kombat X on Steam.
Bonus Edition
Bundle
Bundle 1
Premium Edition
Special Edition
Standard Edition
Compare Choose & Buy Download (723)

[…] MK fans will remember, Cassie was first introduced in Mortal Kombat X and has since been hard at work trying to live up to her parents’ legacy. The trailer shows that […]

A must buy for all Mortal Kombat fans, this game rocks! Very good price for its value!

Mortal Kombat X is great and with the latest update, they fixed most of initial problems.