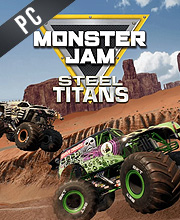 It's a digital key that allows you to download Monster Jam Steel Titans directly to PC from the official Platforms.

How can I find the best prices for Monster Jam Steel Titans CD keys?

Allkeyshop.com compares the cheapest prices of Monster Jam Steel Titans on the digital downloads market to find the best sales and discount codes on trusted stores.

Monster Jam Steel Titans is a sports–racing game published by THQ Nordic and developed by Rainbow Studios for PC.

The developers have handed you keys enabling you to drive towering monster trucks.

In the game you will compete with 25 of the most popular trucks. You can even take the Grave Digger and Max-D for a spin.

The game would not be true to the nature of Monster Jam if total demolition was not permissible. You can break body panels, deform junker cars as well as reduce the environment to rubble.

Bicycles, Stoppies, Moonwalks, Walk Its, Cyclones, Power Outs and Back-Flips are just few of you favorite stunts to perform in the game.

Become captivated by the roar of the massive crowds inside 12 stadiums tightly packed with fans. Said fans are yours and are there to cheer you on as you journey to the Monster Jam World Finals.

There is a huge expanse of outdoor terrain for you to demolish and explore.

Attend the Monster Jam university to train under the same conditions your favorite pro driver was subjected to.

The developer amalgamated all the trucks, stunts, stadiums, racing and massive air in one game.

You can play in various game modes including Stadium and outdoor Racing, various Stunt Challenges and Destruction modes.

Become a part of the Monster Jam Steel Titans experience.

STEAM CD KEY : Use the Steam Key Code on Steam Platform to download and play Monster Jam Steel Titans. You must login to your Steam Account or create one for free. Download the (Steam Client HERE). Then once you login, click Add a Game (located in the bottom Left corner) -> Activate a Product on Steam. There type in your CD Key and the game will be activated and added to your Steam account game library.
EU STEAM CD KEY: Requires an EUROPEAN IP address or you must activate it with a VPN (Virtual Private Network) in order to play Monster Jam Steel Titans. Might have languages restrictions or language packs. Read the description on the store game page to know if the EU IP is only needed for activation or for playing also (maybe on EU Servers). Most of the stores offer you their help, or show you how to do this with a tutorial to follow.
STEAM KEY ROW : It means for Rest Of the World countries which are not concerned by the region restrictions. This product can't be purchased and activated in Several countries. Please read the store description to know the full list of countries which are concerned. Use the key to Download and play Monster Jam Steel Titans on Steam.
GOG.COM CD KEY : You need to register on Gog.com, then use the GOG Key to download and activate your game to play Monster Jam Steel Titans.
ORIGIN CD KEY : Use the Origin Key Code (Electronic Arts - EA) on Origin Platform to download and play Monster Jam Steel Titans. You have to login to your Origin Account or create one for free. Download and install the Origin Software HERE) then you can activate the game on it. Once installed, start Origin, click on the Origin Tab and click on Redeem Product Code and just enter the key. The game will appear in your My games list.
Standard Edition. Read the store description to know the content.

Be the first one to write a review about Monster Jam Steel Titans !

Mindless stupid monster truck fun for a cheap price? Sure, why not!

This game has currently some extremely cheap deals on Allkeyshop !

Bit weird that this has no multiplayer, but at least there is Grave Digger

It’s looking like a fun game to play. Sure I’ll buy when i can.