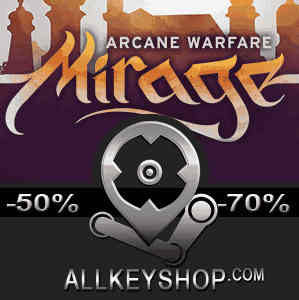 It's a digital key that allows you to download Mirage Arcane Warfare directly to PC from the official Platforms.

How can I find the best prices for Mirage Arcane Warfare CD keys?

Allkeyshop.com compares the cheapest prices of Mirage Arcane Warfare on the digital downloads market to find the best sales and discount codes on trusted stores.

Mirage: Arcane Warfare is an action video game developed and published by Torn Banner Studios. The game can get violent and gory.

You are caught in the middle of a civil unrest and is forced to fight using steel and magic. Choose from the six diverse character classes with a variety of combat load outs. Get to choose from assassins, brutes, mages and so much more.

Explore a fantasy world with multi staged maps. The whole world of Mirage: Arcane Warfare is an interconnected world with amazingly beautiful locales.

Combat can get bloody awesome. The dynamic gore system will have blood splatters, limbs flying and dismemberments all are dynamic and very satisfying.

You can choose to play the game your way either by the new matchmaking system or by the classic server browser, either way, you are sure to have a great time.

Play Mirage: Arcane Warfare and have one of the best gameplays of your life!

Zoom 1m 3m 1y All
Track product
STEAM CD KEY : Use the Steam Key Code on Steam Platform to download and play Mirage Arcane Warfare. You must login to your Steam Account or create one for free. Download the (Steam Client HERE). Then once you login, click Add a Game (located in the bottom Left corner) -> Activate a Product on Steam. There type in your CD Key and the game will be activated and added to your Steam account game library.
Preorder bonus
Standard Edition
Compare Choose & Buy Download (759)

from the creators of chivalry. The game is very beauty and is good, but is almost empty. You cant buy this on steam.

G2play may not be the cheapest place but it sure is safest and fastest. Don’t miss this great game and great deals in Allkeyshop!

MMoga is a best option at the moment to get a game!

I’d recommend buying this game at Kinguin. They are reliable and low price.