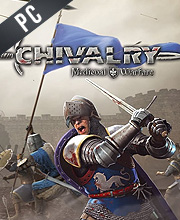 It's a digital key that allows you to download Chivalry Medieval Warfare directly to PC from the official Platforms.

How can I find the best prices for Chivalry Medieval Warfare CD keys?

Allkeyshop.com compares the cheapest prices of Chivalry Medieval Warfare on the digital downloads market to find the best sales and discount codes on trusted stores.

Welcome to the nation of Agatha. A once beautiful nation destroyed by civil war. It has been divided into two factions: the Agathian Knighs and the Mason Order. Both factions are trying their best to gain control of the whole nation. You have to pick which side you will be playing as well as the four character classes that are you will fight with. Each class will have a different set of skills and choices of weaponry.

The four classes consists of first, the Archer. The archer specializes in long range attacks using bows and arrows. They are barely equipped with armor and is not quite effective in close range fights. They do come equipped with a short sword or dagger but could only use it when necessary. Next in the classes are the Man-at-Arms, this class uses a melee weapon in one hand and a shield in the other. They are quite nimble and have great defense because of their speed. The third class is the Vanguard.

The vanguards are the ones that use midrange weapons like poles and great swords, to use them you have to gain quite a bit of distance from the enemy then make a sprinting attack towards your foe. Lastly is the Knight. They are the heaviest of them all, they use two handed weapons and are the slowest of all the classes but has the best defense of them all.

This game plays out like a first-person-shooter but instead of using guns you will be using medieval weaponry. This is one epic battle that you would not want to miss.

STEAM EN KEY : Steam EN Key to download and play Chivalry Medieval Warfare in English language only. Read the store description carefully about language and restrictions.
EU STEAM CD KEY: Requires an EUROPEAN IP address or you must activate it with a VPN (Virtual Private Network) in order to play Chivalry Medieval Warfare. Might have languages restrictions or language packs. Read the description on the store game page to know if the EU IP is only needed for activation or for playing also (maybe on EU Servers). Most of the stores offer you their help, or show you how to do this with a tutorial to follow.
STEAM GIFT : A Steam gift is a one-time transfer you receive. You activate and install Chivalry Medieval Warfare to play on Steam, it is a non-refundable game that stays in your Steam games collection. Please read the store description about any language or region restrictions.
STEAM CD KEY : Use the Steam Key Code on Steam Platform to download and play Chivalry Medieval Warfare. You must login to your Steam Account or create one for free. Download the (Steam Client HERE). Then once you login, click Add a Game (located in the bottom Left corner) -> Activate a Product on Steam. There type in your CD Key and the game will be activated and added to your Steam account game library.
UNITED KINGDOM STEAM CD KEY : This is a Steam Game Code for Chivalry Medieval Warfare with English language only. Read the store's description for more information about language and country restriction.
Complete Pack
Pack X4
Standard Edition
Compare Choose & Buy Download (710)

Ace Combat Horizon is nice game to play, you can buy it from Instant Gaming with good price

A very unique game with an impressive amount of content, there’s no other game quite like it.

Like some pvp action in medieval Europe get this! Really fun game.