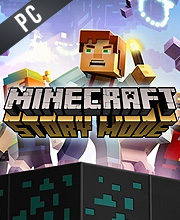 It's a digital key that allows you to download Minecraft Story Mode directly to PC from the official Platforms.

How can I find the best prices for Minecraft Story Mode CD keys?

Allkeyshop.com compares the cheapest prices of Minecraft Story Mode on the digital downloads market to find the best sales and discount codes on trusted stores.

In this delightful adventure in the world of Minecraft you will be playing as Jesse and his friends as they set out to find the Order of the Stone who are four adventurers who slayed the Ender Dragon.

Here you will be following a storyline across the Over world and into the Nether where you will have to solve puzzles and convers with NPC through conversation trees to get clues and decide what to do next. As with many Telltale Games the choices you make and your actions will influence how the story unfolds and what will happen to your character.

In addition to the familiar world of Minecraft that you will be traveling developers have also included the addition of voice actors to lend you character more life and narration to help you on your journey.

You will be given the option to customize Jesse who can be played either as a male or a female and a corresponding voice actor will be assigned ( male or female). The personalities of your companions are also given voice and are said to represent different types of players who frequent the original game of Minecraft.

Divided into 5 different episodes that are being released at different intervals this game allows you to delve into the creative world of Minecraft in a way that has not been possible before and will surely leave you delighted and wanting more.

GOG.COM CD KEY : You need to register on Gog.com, then use the GOG Key to download and activate your game to play Minecraft Story Mode.
PUBLISHER WEBSITE CD KEY: Use the CD Key Code to download directly on the Official Website or from the store to play Minecraft Story Mode. Follow the instructions given by the store. Verify languages available and possible region restrictions before buying.
STEAM GIFT : A Steam gift is a one-time transfer you receive. You activate and install Minecraft Story Mode to play on Steam, it is a non-refundable game that stays in your Steam games collection. Please read the store description about any language or region restrictions.
STEAM CD KEY : Use the Steam Key Code on Steam Platform to download and play Minecraft Story Mode. You must login to your Steam Account or create one for free. Download the (Steam Client HERE). Then once you login, click Add a Game (located in the bottom Left corner) -> Activate a Product on Steam. There type in your CD Key and the game will be activated and added to your Steam account game library.
Complete Edition
Standard Edition

This game have amazing story and every episode is better and better.Episode 3 is released and I recommend everybody to buy it.

waiting for the mode to be out so we can judge , but it looks like a refrashing one