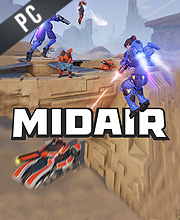 What is Midair CD key?

It's a digital key that allows you to download Midair directly to PC from the official Platforms.

How can I find the best prices for Midair CD keys?

Allkeyshop.com compares the cheapest prices of Midair on the digital downloads market to find the best sales and discount codes on trusted stores.

Get to experience a new shooter set in a stunning sci-fi environment. It features the character’s high-flying movements, use of new and high powered weapons, and outstanding defensive armors.

Using a jetpack, players can glide across the land, fly through the air and initiate deadly aerial attacks. They will also have full control in customizing their armors, whether it be a Light, Medium or Heavy Armor. Deadly and powerful weapons such as Chainguns and Grenade Launchers can be used in different situations to bring down the opponent, and item combinations give special abilities to turn the fight into the player’s favor or help mobilize the defenses where it is needed.

The game also features a multiplayer mode where players can form a team, build up offensive and defensive strategies.

MidAir also has different game modes, and this includes Rabbit, Arena and Capture the Flag.

STEAM CD KEY : Use the Steam Key Code on Steam Platform to download and play Midair. You must login to your Steam Account or create one for free. Download the (Steam Client HERE). Then once you login, click Add a Game (located in the bottom Left corner) -> Activate a Product on Steam. There type in your CD Key and the game will be activated and added to your Steam account game library.
Early Access

This is awesome loved Tribes so much and now I love Midair too!! Although I do think the maps have a little too many small bumps which I know makes the maps harder, but I really think that it’s too much, at least if they want a big crowd to play their game..