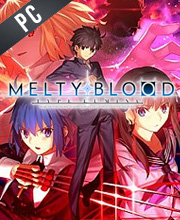 It's a digital key that allows you to download Melty Blood Type Lumina directly to PC from the official Platforms.

How can I find the best prices for Melty Blood Type Lumina CD keys?

Allkeyshop.com compares the cheapest prices of Melty Blood Type Lumina on the digital downloads market to find the best sales and discount codes on trusted stores.

Melty Blood Type Lumina is a 2D fighting game based on the popular romance visual novel Tsukihime, developed by Japanese studio French Bread and in close collaboration with Type-Moon. Type Lumina itself is a remake of the original Melty Blood game released for PCs in 2002. Aside from the graphical updates Type Lumina also has rebuilt Melty Blood’s battle system from the ground up making it easier for new players to perform combos while also preserving the game’s original spirit, so long-time fans can still enjoy the game they know and love.

Those with a taste for speedy fighters will be right at home with Melty Blood: Type Lumina. The series’ in-depth mechanics are alive and well in this reboot, making this arguably the best entry yet.

This Edition of Melty Blood Type Lumina contains the base game, the preorder bonus if you bought the game before October 27, 2021, and the Melty Blood Archives.

This DLC replaces the Old Announcer voice with the Voice of Arcueid Brunestud.

This DLC replaces the Old Announcer voice with the Voice of Saber.

This DLC replaces the Old Announcer voice with the Voice of Akiha Tohno.

Find all the best prices for Melty Blood Type Lumina DLC’s on Allkeyshop!

Zoom 1m 3m 1y All
Track product
EU STEAM CD KEY: Requires an EUROPEAN IP address or you must activate it with a VPN (Virtual Private Network) in order to play Melty Blood Type Lumina. Might have languages restrictions or language packs. Read the description on the store game page to know if the EU IP is only needed for activation or for playing also (maybe on EU Servers). Most of the stores offer you their help, or show you how to do this with a tutorial to follow.
EUROPEAN STEAM GIFT : It’s a steam gift for Europe which requires an European IP address to activate and to play Melty Blood Type Lumina on Steam. Read carefully the store description about region and language restrictions.
STEAM GIFT : A Steam gift is a one-time transfer you receive. You activate and install Melty Blood Type Lumina to play on Steam, it is a non-refundable game that stays in your Steam games collection. Please read the store description about any language or region restrictions.
STEAM CD KEY : Use the Steam Key Code on Steam Platform to download and play Melty Blood Type Lumina. You must login to your Steam Account or create one for free. Download the (Steam Client HERE). Then once you login, click Add a Game (located in the bottom Left corner) -> Activate a Product on Steam. There type in your CD Key and the game will be activated and added to your Steam account game library.
Deluxe Edition
Standard Edition
Compare Choose & Buy Download (772)