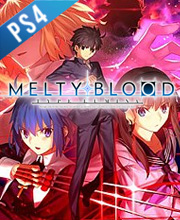 It's a digital key that allows you to download Melty Blood Type Lumina directly to Playstation 4 from PSN (Playstation network).

Allkeyshop.com compares the cheapest prices of Melty Blood Type Lumina on the digital downloads market to find the best sales and discount codes on trusted stores.

Melty Blood Type Lumina is a 2D fighting game based on the popular romance visual novel Tsukihime, developed by Japanese studio French Bread and in close collaboration with Type-Moon. Type Lumina itself is a remake of the original Melty Blood game released for PCs in 2002. Aside from the graphical updates Type Lumina also has rebuilt Melty Blood’s battle system from the ground up making it easier for new players to perform combos while also preserving the game’s original spirit, so long-time fans can still enjoy the game they know and love.

Melty Blood: Type Lumina highlights so many of the genre’s strong points, it truly reminds me why I love it so much. Yet it’s also an amazing entry point for the series or even fighters as a whole. With updates and more DLC on the way, it may even be the best new fighting game in years, with a hell of a long life ahead of it.

This Edition of Melty Blood Type Lumina contains the base game, the preorder bonus if you bought the game before October 27, 2021, and the Melty Blood Archives.

This DLC replaces the Old Announcer voice with the Voice of Arcueid Brunestud.

This DLC replaces the Old Announcer voice with the Voice of Saber.

This DLC replaces the Old Announcer voice with the Voice of Akiha Tohno.

Find all the best prices for Melty Blood Type Lumina DLC’s on Allkeyshop!