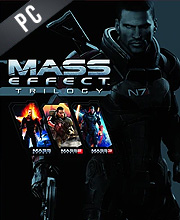 It's a digital key that allows you to download Mass Effect Trilogy directly to PC from the official Platforms.

How can I find the best prices for Mass Effect Trilogy CD keys?

Allkeyshop.com compares the cheapest prices of Mass Effect Trilogy on the digital downloads market to find the best sales and discount codes on trusted stores.

You take on the role of Commander Shepard, a soldier whose mission is to save the galaxy from a race of powerful mechanical beings known as the Reapers and their agents, including their big bosses. Success or failure still depends heavily on the crew you assemble and their loyalty to you and the mission.

Although the games are years apart, all of them feature stunning graphics and a refined dialogue system which draws you into their respective stories. As you go through the stages, you can go and focus on character customization options that let you create your own version of Commander Shepard.

The most brilliant sci-fi trilogy since Star Wars, Mass Effect Trilogy is an incredibly immersive game, fleshed out in brilliant graphic style and superb story telling. Pick up the series and prepare to be engaged for days and days.

Zoom 1m 3m 1y All
Track product
ORIGIN CD KEY : Use the Origin Key Code (Electronic Arts - EA) on Origin Platform to download and play Mass Effect Trilogy. You have to login to your Origin Account or create one for free. Download and install the Origin Software HERE) then you can activate the game on it. Once installed, start Origin, click on the Origin Tab and click on Redeem Product Code and just enter the key. The game will appear in your My games list.
PUBLISHER WEBSITE CD KEY: Use the CD Key Code to download directly on the Official Website or from the store to play Mass Effect Trilogy. Follow the instructions given by the store. Verify languages available and possible region restrictions before buying.
Standard Edition
Compare Choose & Buy Download (743)

I love this and the Mass Effect Trilogy although the third mass effect isnt on steam sadly. If you like RPG games where choices actully matter then this trilogy is the game for you. Id get this before you get Andromeda because you understand the universe more and in my opinion this game is better then Andromeda.

beautiful game i really like it, it’s amazing!
A+