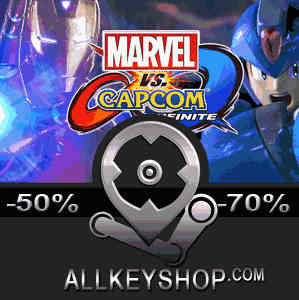 What is Marvel vs Capcom Infinite CD key?

It's a digital key that allows you to download Marvel vs Capcom Infinite directly to PC from the official Platforms.

How can I find the best prices for Marvel vs Capcom Infinite CD keys?

Allkeyshop.com compares the cheapest prices of Marvel vs Capcom Infinite on the digital downloads market to find the best sales and discount codes on trusted stores.

Ultron and Sigma has fused themselves into one ultimate being called the Ultron Sigma. This was done using two infinity stones. They plan to merge both the Marvel and Capcom worlds into just one single dimension and unleash a cybernetic virus to control everybody. They have to be stopped so the heroes, as well as the villains of both worlds, will join together and defeat them and their evil plan.

Choose from the multiple characters of Marvel and Capcom. The game now features two-on-two battles with a tag based combo system. This allows the players to create continuous combos between the two characters that they have chosen.

A new gameplay mechanic also is introduced with the use of Infinity Stones that will boost stats and give unique abilities to its characters.

Marvel vs. Capcom: Infinite has a lot in store for all its players. What are you waiting for? Play it now!

Be the first one to write a review about Marvel vs Capcom Infinite !

Marvel vs. Capcom: Infinite is a good game of fights with solid mechanics.

Gameplay is incredible. Graphics not so much. However, I go in for fun not for looks. The story mode was subpar, but the real fun is in the multiplayer

Hello there,
Marvel vs Capcom Infinite is one of good games

Wow, i like that current fighting games are coming to PC too and are not Console exclusives :] And good prices! Thanks Allkeyshop! :]

Lot of cheap keys for MvCI if you live in the right regions. Please note the keys from Gaming Dragons and G2A appear to be EMEA as well, not ROW even though their store page titles do say ROW/Global.