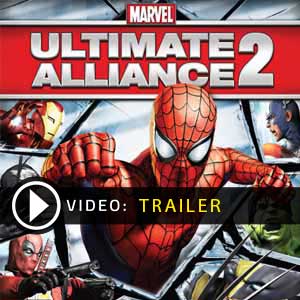 It's a digital key that allows you to download Marvel Ultimate Alliance 2 directly to PC from the official Platforms.

How can I find the best prices for Marvel Ultimate Alliance 2 CD keys?

Allkeyshop.com compares the cheapest prices of Marvel Ultimate Alliance 2 on the digital downloads market to find the best sales and discount codes on trusted stores.

Marvel Ultimate Alliance 2 is an action, adventure, role-playing video game developed by Zoë Mode and published by Activision. Get to play the characters featured in the famous Marvel Comics.

There is trouble in the Marvel Universe. A separation is about to occur since the Superhuman Registration Act has been allowed to become official government agents as weapons. Not all Superheroes agree to this. Iron Man is pro-registration and Captain America is against it, resulting in a Civil War.

Select the side you would want and choose your team of four. There will be a huge list of characters to choose from, from villains to heroes. If you want to swap characters during the gameplay, you can actually do so. The task to finish will depend on which side you choose.

Marvel Ultimate Alliance 2 has a new and improved power system named ‘fusion’ this will allow two characters to combine their powers to create a new attack. Mix and match and be amazed at what attacks will come out.