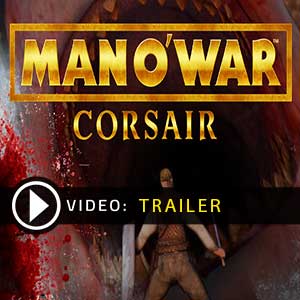 It's a digital key that allows you to download Man O War Corsair directly to PC from the official Platforms.

How can I find the best prices for Man O War Corsair CD keys?

Allkeyshop.com compares the cheapest prices of Man O War Corsair on the digital downloads market to find the best sales and discount codes on trusted stores.

Get to explore the high seas of the Warhammer world in Man O’ War: Corsair. Engage yourselves in epic explorations and high adventure as well as badass naval combat.

Your quest is to dominate everything! Plunder enemy ships with your vast fleet of ships behind you. Make sure to visit the many ports of the huge Warhammer world to be able to trade goods.

Command allies that come from different nations and races. You will be able to operate a wide variety of unique sailing vessels which are all equipped with weapons to combat enemy ships as well as the terrifying creatures that hide in the unexplored deep ocean. You would also have to contend with nature as she can whip up deadly storms that can sink your ships.

Will you go down in history books as the legend of the seas of Warhammer or go unnoticed? Set your sails to greatness in Man O’ War: Corsair.

GOG.COM CD KEY : You need to register on Gog.com, then use the GOG Key to download and activate your game to play Man O War Corsair.
STEAM CD KEY : Use the Steam Key Code on Steam Platform to download and play Man O War Corsair. You must login to your Steam Account or create one for free. Download the (Steam Client HERE). Then once you login, click Add a Game (located in the bottom Left corner) -> Activate a Product on Steam. There type in your CD Key and the game will be activated and added to your Steam account game library.
STEAM GIFT : A Steam gift is a one-time transfer you receive. You activate and install Man O War Corsair to play on Steam, it is a non-refundable game that stays in your Steam games collection. Please read the store description about any language or region restrictions.
Bundle. Read the store description to know the content.
Complete Collection
Standard Edition. Read the store description to know the content.

Be the first one to write a review about Man O War Corsair !