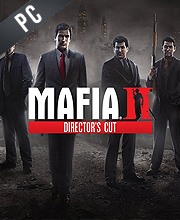 It's a digital key that allows you to download Mafia 2 Directors Cut directly to PC from the official Platforms.

How can I find the best prices for Mafia 2 Directors Cut CD keys?

Allkeyshop.com compares the cheapest prices of Mafia 2 Directors Cut on the digital downloads market to find the best sales and discount codes on trusted stores.

Offering an action-packed gameplay with intense gameplay, fast-paced car chases, hand-to-hand combat and so much more. The game had been inspired by iconic Mafia dramas. The game world is immersive and is set in the period of World War II in Europe.

Also, enjoy the game’s soundtrack as it offers a mood of that era all thanks to some of the era’s influential artists.

GOG.COM CD KEY : You need to register on Gog.com, then use the GOG Key to download and activate your game to play Mafia 2 Directors Cut.
STEAM CD KEY : Use the Steam Key Code on Steam Platform to download and play Mafia 2 Directors Cut. You must login to your Steam Account or create one for free. Download the (Steam Client HERE). Then once you login, click Add a Game (located in the bottom Left corner) -> Activate a Product on Steam. There type in your CD Key and the game will be activated and added to your Steam account game library.
Standard Edition

Really feels like playing a good mafia movie. With all the ups – like guys in suits shooting at each other with tommy guns or the usual mob politics – and downs including the tedious moments where the characters drive to the other side of town for a new job by the boss. Holy crap do you drive in this game: at times you’ll drive normally to the other side of town, at other times you’ll drive tailing a car without getting too close, or to spice things up a bit you’ll drive with the police chasing you – oh and don’t forget you’ll have to drive back home after the mission is over.

Mafia 2 is one of my favorite singleplayer games. I recommend buying this version since it includes all the DLC.