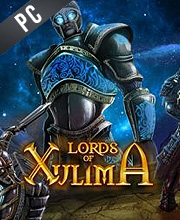 What is Lords of Xulima CD key?

It's a digital key that allows you to download Lords of Xulima directly to PC from the official Platforms.

How can I find the best prices for Lords of Xulima CD keys?

Allkeyshop.com compares the cheapest prices of Lords of Xulima on the digital downloads market to find the best sales and discount codes on trusted stores.

Lords of Xulima also known as LOX is a role-playing game developed and published by Numantian Games.

The game is set in a world where the gods have mysteriously vanished, but where one of them communicates with your party in a dream, and requests it to purify the eight shrines of the gods, which have been changed into prison camps — or worse — by the renegade god Yul. You have to make your party of six characters.

One of them has to be Gaulen the Explorer, who is the only selection that can be the Explorer class. Other classes to choose from are Arcane Soldier, Barbarian, Bard, Cleric, Divine Summoner, Mage, Paladin, Soldier, or Thief. Each class has a range of skills and spells that includes weapon and armor proficiency, combat maneuvers, offensive spells, and healing spells.

The world of Xulima is divided into 14 areas. Every town has a priest to heal wounds and cure curses and diseases, a food merchant to sell you sustenance for your explorations, an equipment merchant who vends a little bit of everything, and a trainer who gives you missions and sells you skill points. The missions in the game are very simple, usually just requiring you to look for missing people or collect items from enemies.

Zoom 1m 3m 1y All
Track product
GOG.COM CD KEY : You need to register on Gog.com, then use the GOG Key to download and activate your game to play Lords of Xulima.
STEAM GIFT : A Steam gift is a one-time transfer you receive. You activate and install Lords of Xulima to play on Steam, it is a non-refundable game that stays in your Steam games collection. Please read the store description about any language or region restrictions.
STEAM CD KEY : Use the Steam Key Code on Steam Platform to download and play Lords of Xulima. You must login to your Steam Account or create one for free. Download the (Steam Client HERE). Then once you login, click Add a Game (located in the bottom Left corner) -> Activate a Product on Steam. There type in your CD Key and the game will be activated and added to your Steam account game library.
Deluxe Edition
Standard Edition
Compare Choose & Buy Download (772)

Great game if you’re up for a challenge. Very old-school feel to it, including the graphics but it works well for the game. (the actual fight scenes are more elaborate graphically) Very immersive and a great way to spend some time if you’re into single player games.

super cool game , i cannot wait to purchase it soon , it is a must .