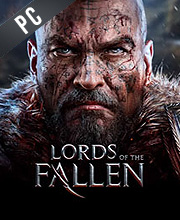 What is Lords of the Fallen CD key?

It's a digital key that allows you to download Lords of the Fallen directly to PC from the official Platforms.

How can I find the best prices for Lords of the Fallen CD keys?

Allkeyshop.com compares the cheapest prices of Lords of the Fallen on the digital downloads market to find the best sales and discount codes on trusted stores.

Lords of the Fallen is an action–RPG played in the third-person perspective and is developed by Deck13 Interactive and CI Games and published by Bandai Namco Games.

In Lords of the Fallen, players take on the role of Harkyn, a convicted criminal. In order to stop an invasion of Adyr‘s demonic forces (the Rhogar), a monk named Kaslo releases Harkyn from prison.

Harkyn can be tailored according to the player’s preferred combat style that ranges from different classes, each with their own specializations in certain weapons, armors, spells, and abilities. Each class (Warrior, Cleric, or Rogue) is determined according to the types of magic and armor sets the player chooses. The player chooses 2 from the 3 magic types (brawling, deception, and solace), and 1 from 3 different armor sets (warrior, rogue, and cleric).

In terms of the storyline, Lords of the Fallen is divided into acts which progresses through a main story. ew areas are constantly opened as the player progresses through the game. Each area can also have multiple paths, hidden locations to discover, and potential shortcuts. NPCs will also be of great help when gathering further information, or getting additional tasks for more rewards.

The game uses a “”risk and reward“” system which will allow the player to upgrade Harkyn. This will depend on the amount of experience a player can gain, and can be increased through the use of a multiplier. The game also employs a choice and consequence feature where each choice you make affects the outcome of the story.

Make the right choice today. Get Lords of the Fallen now!

Day One: Lords of The Fallen, The Monk’s Decipher and Demonic Weapons Pack.)

Lords of the Fallen is a fun game, similar to Dark Souls but a tad bit easier.

A thrilling medieval experience, hard battles to win and critical story to bear, a must have for a very cheap price!

I`ve played this game for weeks. It is very good. Best deal now!

Hello there,
Good graphics and a good game overall..looks fun 🙂

Fair price for this game. Its not the best out there but very VFM