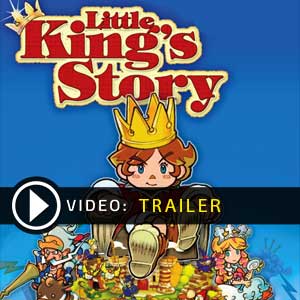 It's a digital key that allows you to download Little King's Story directly to PC from the official Platforms.

How can I find the best prices for Little King's Story CD keys?

Allkeyshop.com compares the cheapest prices of Little King's Story on the digital downloads market to find the best sales and discount codes on trusted stores.

You will be playing as a shy little boy from a small village. This boy found a crown in the forest that would give him powers that can control and charm the citizens. With this new found powers are new found friends named Liam, Verde, and Howser the Bull Knight.

With your crown and new companions, you will build up your little kingdom of Alpoko. You will make Alpoko rise from what it was before and make it a successful kingdom with the help of your adviser Howser.

With so much confidence, you will not stop at just making the kingdom of Alpoko great. But the ultimate goal is world domination.

Build, fortify, quest and adventure are some of the things that you can look forward to in Little King’s Story.

Zoom 1m 3m 1y All
Track product
GOG.COM CD KEY : You need to register on Gog.com, then use the GOG Key to download and activate your game to play Little King's Story.
STEAM CD KEY : Use the Steam Key Code on Steam Platform to download and play Little King's Story. You must login to your Steam Account or create one for free. Download the (Steam Client HERE). Then once you login, click Add a Game (located in the bottom Left corner) -> Activate a Product on Steam. There type in your CD Key and the game will be activated and added to your Steam account game library.
Standard Edition
Compare Choose & Buy Download (743)