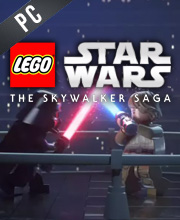 You can participate to these tests by adding comments about your digital download purchase in the store review page. Enjoy the best deals for LEGO Star Wars The Skywalker Saga CD Key with Allkeyshop.com!

Lego Star Wars: The Skywalker Saga is an action–adventure video game that is developed by TT Games and published by Warner Bros. Interactive Entertainment.

Set in an open-world hub, players are able to choose to start the game from any of the main Skywalker Saga episodes. The episodes can be completed in any order that the player would like. Every episode will come with five-story missions and a total of 45 levels.

There are nine Star Wars Saga films in the game and each one gives players fun-filled adventures playful humor you can simply just dive right into the Star Wars universe with this.

Offering a revamped combat having a variety of combos when it comes to lightsaber fights. There will be light to heavy attacks as well as Force moves. There will also be more than 200 playable characters available to be controlled.

Jump right into the Lego Star Wars: The Skywalker Saga and journey into a faraway galaxy.
TO BE ANNOUNCED
Shop
Platform
Edition
Price (without fees)
Fees
AKS SCORE
—

STEAM CD KEY : Use the Steam Key Code on Steam Platform to download and play LEGO Star Wars The Skywalker Saga. You must login to your Steam Account or create one for free. Download the (Steam Client HERE). Then once you login, click Add a Game (located in the bottom Left corner) -> Activate a Product on Steam. There type in your CD Key and the game will be activated and added to your Steam account game library.
Standard Edition. Read the store description to know the content.

Be the first one to write a review about LEGO Star Wars The Skywalker Saga !