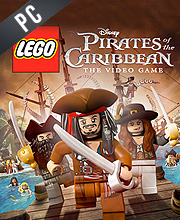 What is Lego Pirates Of The Caribbean The Video Game CD key?

It's a digital key that allows you to download Lego Pirates Of The Caribbean The Video Game directly to PC from the official Platforms.

How can I find the best prices for Lego Pirates Of The Caribbean The Video Game CD keys?

Allkeyshop.com compares the cheapest prices of Lego Pirates Of The Caribbean The Video Game on the digital downloads market to find the best sales and discount codes on trusted stores.

LEGO Pirates of the Caribbean is an action–adventure game developed by Traveller’s Tales and published by Disney Interactive Studios.

This humorous parody takes over the first four films in the series Pirates of the Caribbean: The Curse of the Black Pearl, The Dead Man’s Chest, At World’s End, and On Stranger Tides.

The gameplay is similar to other Lego games where you can play as one or two players via split screen. You can embody dozens of characters, including Jack Sparrow, each having their own characteristics. You will have to evolve in this universe and face many opponents as well as many puzzles.

If you’re a fan of the LEGO universe and the Pirates of the Caribbean saga, you will have a wonderful time!

178/5000
I suggest first to see all the first four films in the series and then play this game. If you haven’t played any LEGO games yet, I recommend starting with this