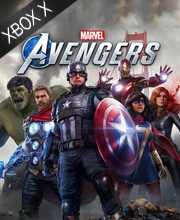 It's a digital key that allows you to download LEGO Marvels Avengers directly to PC from the official Platforms.

How can I find the best prices for LEGO Marvels Avengers CD keys?

Allkeyshop.com compares the cheapest prices of LEGO Marvels Avengers on the digital downloads market to find the best sales and discount codes on trusted stores.

Lego Marvels Avengers is a Lego game developed by Travelers Tales Games; a light-hearted superhero adventure based on Marvel’s Avengers movies. Join the Avengers team and experience a Lego adventure retelling of these blockbuster movies, characters, and storylines from the Avengers, Avengers Age of Ultron, Captain America the First Avenger, Iron Man 3, Thor the Dark World, and many more from the marvel cinematic universe.