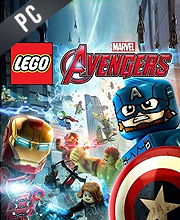 It's a digital key that allows you to download Lego Marvels Avengers directly to PC from the official Platforms.

How can I find the best prices for Lego Marvels Avengers CD keys?

Allkeyshop.com compares the cheapest prices of Lego Marvels Avengers on the digital downloads market to find the best sales and discount codes on trusted stores.

In this Lego Marvel’s Avengers are the sequences of the six feature films Marvel Avengers and as a result the Age of Ultron, but also the first two films of Captain America, The First Avenger and The Winter Soldier, not to forget Iron Man 3 and Thor: The Dark World. There are eight worlds to explore, all open world.

Who has never dreamed to walk in Asgard or in New York or even in Washington? To travel between these worlds you can use a spaceship. Once you are in space you can control the camera on the world map to go wherever you want. Like most LEGO games, a large amount of missions are offered, as well as numerous items to discover and collect. And as usual, the adventure is available in solo but also in two-player split screen fixed or dynamic (but no online multi).

More than 150 people are available with hundreds of heroes and wicked, original from the previous game. The values will be well presented as Captain America or Hulk but alot of unreal creatures coming straight from the Marvel archives will also be there as extraterrestrial dragon Fin Fang Foom or Devil Dinosaur. Iron Man has fourteen different weaves accessible via a selection wheel that appears holding a key. Hurry up and try it, you will not be disappointed!

EU STEAM CD KEY: Requires an EUROPEAN IP address or you must activate it with a VPN (Virtual Private Network) in order to play Lego Marvels Avengers. Might have languages restrictions or language packs. Read the description on the store game page to know if the EU IP is only needed for activation or for playing also (maybe on EU Servers). Most of the stores offer you their help, or show you how to do this with a tutorial to follow.
EUROPEAN STEAM GIFT : It’s a steam gift for Europe which requires an European IP address to activate and to play Lego Marvels Avengers on Steam. Read carefully the store description about region and language restrictions.
STEAM GIFT : A Steam gift is a one-time transfer you receive. You activate and install Lego Marvels Avengers to play on Steam, it is a non-refundable game that stays in your Steam games collection. Please read the store description about any language or region restrictions.
STEAM CD KEY : Use the Steam Key Code on Steam Platform to download and play Lego Marvels Avengers. You must login to your Steam Account or create one for free. Download the (Steam Client HERE). Then once you login, click Add a Game (located in the bottom Left corner) -> Activate a Product on Steam. There type in your CD Key and the game will be activated and added to your Steam account game library.
STEAM KEY ROW : It means for Rest Of the World countries which are not concerned by the region restrictions. This product can't be purchased and activated in Several countries. Please read the store description to know the full list of countries which are concerned. Use the key to Download and play Lego Marvels Avengers on Steam.
Collection
Deluxe Edition
Standard Edition

This is what FPS players have been waiting for. Open world play the mission any way you want