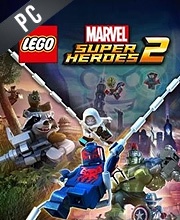 It's a digital key that allows you to download LEGO Marvel Super Heroes 2 directly to PC from the official Platforms.

How can I find the best prices for LEGO Marvel Super Heroes 2 CD keys?

Allkeyshop.com compares the cheapest prices of LEGO Marvel Super Heroes 2 on the digital downloads market to find the best sales and discount codes on trusted stores.

Lego Marvel Super Heroes 2 is an action adventure video game that is developed by TT Games and published by Warner Bros. Interactive Entertainment. Also, as the title suggests, the game is Lego-themed.

The game is the follow up to 2013’s Lego Marvel Super Heroes. Set in Chronolopolis, our heroes will go after the enemy Kong the Conqueror. This enemy’s special power is that he is able to time travel. Our heroes in the game too would have the ability to manipulate time but to some extent only.

Some of the heroes available in the game are the Guardians of the Galaxy, the Green Goblin, Doctor Strange, Captain Marvel, Black Panther, Hulk, Thor, Cowboy Captain America, Spider-Man 2099 and much more.

As with the previous game, the mechanics are quite the same. The game is played in a third-person perspective where there are different action and adventure sequences as well as puzzle solving scenarios. A new feature added to the game is the four player Competitive Super Hero Battling Mode. This allows players to go fight one another in battle arenas to see who is best!

With a cool roster of heroes and villains and such an entertaining gameplay and story line, you will definitely enjoy Lego Marvel Super Heroes 2.

STEAM EMEA KEY : What is Steam Key EMEA signification? EMEA means for Europe, Middle East and Africa and several other countries. Please read the store description about country and language restrictions to know which are concerned. Use the key to Download and play LEGO Marvel Super Heroes 2 on Steam.
EU STEAM CD KEY: Requires an EUROPEAN IP address or you must activate it with a VPN (Virtual Private Network) in order to play LEGO Marvel Super Heroes 2. Might have languages restrictions or language packs. Read the description on the store game page to know if the EU IP is only needed for activation or for playing also (maybe on EU Servers). Most of the stores offer you their help, or show you how to do this with a tutorial to follow.
EUROPEAN STEAM GIFT : It’s a steam gift for Europe which requires an European IP address to activate and to play LEGO Marvel Super Heroes 2 on Steam. Read carefully the store description about region and language restrictions.
STEAM GIFT : A Steam gift is a one-time transfer you receive. You activate and install LEGO Marvel Super Heroes 2 to play on Steam, it is a non-refundable game that stays in your Steam games collection. Please read the store description about any language or region restrictions.
STEAM CD KEY : Use the Steam Key Code on Steam Platform to download and play LEGO Marvel Super Heroes 2. You must login to your Steam Account or create one for free. Download the (Steam Client HERE). Then once you login, click Add a Game (located in the bottom Left corner) -> Activate a Product on Steam. There type in your CD Key and the game will be activated and added to your Steam account game library.
Bundle
Collection
Deluxe Edition
Standard Edition

The continuation of the first chapter which, personally, I consider it better.

Gamivo seems to have an unbelievably cheap price for this game!

Personally it’s surprising the LEGO and Marvel partnership has lasted this long, but good for fans of the series