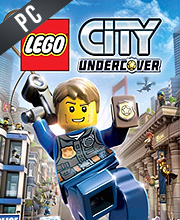 It's a digital key that allows you to download Lego City Undercover directly to PC from the official Platforms.

How can I find the best prices for Lego City Undercover CD keys?

Allkeyshop.com compares the cheapest prices of Lego City Undercover on the digital downloads market to find the best sales and discount codes on trusted stores.

Welcome to the vast world of Lego City. Crime is everywhere in the metropolis and they are in need of a trust-worthy cop to keep the city safe. Get to play as an undercover cop named Chase McCain and apprehend the bad guys.

Enforce the law with the different moves available for your character. Chase is able to perform wall jumps as well as swinging from pole to pole. And since he is undercover, different disguises are available that will give Chase lock breaking skills. Chase will also have access different vehicles from cars to helicopters!

Make sure to infiltrate all the criminal gangs in Lego City and restore peace and order!

Are you up for the task in taking the role of a police officer in Lego City Undercover? Will you be putting an end to the city’s criminal acts?

Play Lego City Undercover and uphold the law every chance you get!

Zoom 1m 3m 1y All
Track product
EU STEAM CD KEY: Requires an EUROPEAN IP address or you must activate it with a VPN (Virtual Private Network) in order to play Lego City Undercover. Might have languages restrictions or language packs. Read the description on the store game page to know if the EU IP is only needed for activation or for playing also (maybe on EU Servers). Most of the stores offer you their help, or show you how to do this with a tutorial to follow.
STEAM CD KEY : Use the Steam Key Code on Steam Platform to download and play Lego City Undercover. You must login to your Steam Account or create one for free. Download the (Steam Client HERE). Then once you login, click Add a Game (located in the bottom Left corner) -> Activate a Product on Steam. There type in your CD Key and the game will be activated and added to your Steam account game library.
STEAM KEY ROW : It means for Rest Of the World countries which are not concerned by the region restrictions. This product can't be purchased and activated in Several countries. Please read the store description to know the full list of countries which are concerned. Use the key to Download and play Lego City Undercover on Steam.
PLAYSTATION GAME CODE US : Playstation Code for North America only to download and play Lego City Undercover on US Account. Activate the code on the Playstation Network to download your game. Read carefully the store description about any language and region restrictions.
Legendary Edition
Standard Edition
Compare Choose & Buy Download (759)