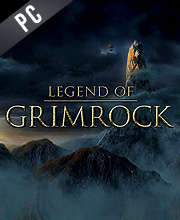 What is Legend of Grimrock CD key?

It's a digital key that allows you to download Legend of Grimrock directly to PC from the official Platforms.

How can I find the best prices for Legend of Grimrock CD keys?

Allkeyshop.com compares the cheapest prices of Legend of Grimrock on the digital downloads market to find the best sales and discount codes on trusted stores.

Legend of Grimrock is a 3D grid-based dungeon crawler and action role-playing game. It is based on the classic 1980’s action fantasy role-playing game Dungeon Masters. It was developed and published by Almost Human Ltd.

In The Legend of Grimrock, the player controls one to four characters as they move through a grid based dungeon. The game consists of a combinations of combat and puzzle solving. The game character gains experience when slaying enemy beasts and creatures in the dungeon.

By gaining experience, the game character increases their levels and skills which enhances their fighting abilities and spell casting. Weapons and armor can also be obtained by exploring the dungeons and solving the puzzles. Bonus puzzles are also provided in the game which gives superior items and equipment.

The game was set in the the mountain of Grimrock. A place where the prisoners are thrown into its pit to absolve them of their crimes. In the game, a group of prisoners were brought to the mountain. Because of their will to escape, they traveled downwards the mountain guided by a disembodied voice giving them instructions where to go. Upon reaching the bottom of the mountain, they find a machine.

The machine needs to be assembled which will create an escape portal in order for them to leave the place. After assembling the machine, they found out that the voice who guided them turned out to be the machine itself, which manifests itself into a giant clockwork cube who wants to crush the game characters. Escaping through the portal, the players finds themselves a way to defeat the enemy.

GOG.COM CD KEY : You need to register on Gog.com, then use the GOG Key to download and activate your game to play Legend of Grimrock.
STEAM CD KEY : Use the Steam Key Code on Steam Platform to download and play Legend of Grimrock. You must login to your Steam Account or create one for free. Download the (Steam Client HERE). Then once you login, click Add a Game (located in the bottom Left corner) -> Activate a Product on Steam. There type in your CD Key and the game will be activated and added to your Steam account game library.
STEAM GIFT : A Steam gift is a one-time transfer you receive. You activate and install Legend of Grimrock to play on Steam, it is a non-refundable game that stays in your Steam games collection. Please read the store description about any language or region restrictions.
EUROPEAN STEAM GIFT : It’s a steam gift for Europe which requires an European IP address to activate and to play Legend of Grimrock on Steam. Read carefully the store description about region and language restrictions.
Bundle
Standard Edition

Be the first one to write a review about Legend of Grimrock !

A winding dungeon crawler filled with tricks and traps and tons of mysteries. Not for everyone, but an excellent grid movement/wall scanning simulator.

A winding dungeon crawler filled with tricks and traps and tons of mysteries. Not for everyone, but an excellent grid movement/wall scanning simulator.