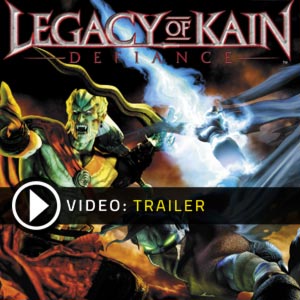 What is Legacy of Kain Defiance CD key?

It's a digital key that allows you to download Legacy of Kain Defiance directly to PC from the official Platforms.

How can I find the best prices for Legacy of Kain Defiance CD keys?

Allkeyshop.com compares the cheapest prices of Legacy of Kain Defiance on the digital downloads market to find the best sales and discount codes on trusted stores.

Legacy of Kain Defiance is an action–adventure game developed by Crystal Dynamics and published by Square Enix, and is the fifth game in the Legacy of Kain series.

The game continues the story of Vampire lord Kain and Raziel. Both characters are playable and are equipped with a legendary sword each. Together, they have to battle through a world full of conflict and intrigue while attempting to unravel their destinies as well as defeating the dark forces that aim to take over their world.

Unlike in the previous Legacy of Kain games, the only weapon available for Kain this time is the Soul Reaver. Aside from using the Soul Reaver, he is also able to obtain five emblems which can enhance the Soul Reaver. The enhancements are: balance, conflict, energy, dimension, and time.

Raziel, on the other hand, retains his original weapons from the previous games. Killing enemies will enable Raziel and Kain to learn new combat techniques like mid-air slashes and uppercuts. Various elemental powers can also be acquired and in turn give them new abilities. You will also get to alternately control Kain and Raziel throughout missions. Other key game features include solving puzzles and engaging combat mechanics.

Zoom 1m 3m 1y All
Track product
GOG.COM CD KEY : You need to register on Gog.com, then use the GOG Key to download and activate your game to play Legacy of Kain Defiance.
STEAM CD KEY : Use the Steam Key Code on Steam Platform to download and play Legacy of Kain Defiance. You must login to your Steam Account or create one for free. Download the (Steam Client HERE). Then once you login, click Add a Game (located in the bottom Left corner) -> Activate a Product on Steam. There type in your CD Key and the game will be activated and added to your Steam account game library.
Bundle
Collection
Standard Edition
Compare Choose & Buy Download (743)