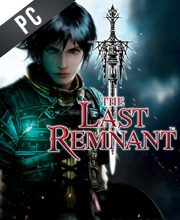 What is The Last Remnant CD key?

It's a digital key that allows you to download The Last Remnant directly to PC from the official Platforms.

How can I find the best prices for The Last Remnant CD keys?

Allkeyshop.com compares the cheapest prices of The Last Remnant on the digital downloads market to find the best sales and discount codes on trusted stores.

The Last Remnant is a role-playing video game that is developed and published by Square Enix.

The world is filled with mysterious artifacts from an ancient era called Remnants. No one knows where these artifacts came from but it soon became useful to the four races that exist in the world – Mitra, Yana, Qsiti, and Sovani. At first, the world was at peace, however, the remnants were slowly changing the world’s balance. A rift had been made between those who ruled as well as those who obeyed. Because of this, a new era has been established.

The Last Remnant offers countless characters with an enthralling story. A new and intricate battle system can also be seen which had been greatly improved. For faster progression, the game can now be played with twice the speed with the new Turbo Mode. Players are also able to create unions without the leader units. Get to purchase items that depend on stats as well as aesthetics with the new equipment preview feature. Also, both English and Japanese voice acting are now available so players are able to switch between both.

Join one man’s journey through this new world with The Last Remnant.

EU STEAM CD KEY: Requires an EUROPEAN IP address or you must activate it with a VPN (Virtual Private Network) in order to play The Last Remnant. Might have languages restrictions or language packs. Read the description on the store game page to know if the EU IP is only needed for activation or for playing also (maybe on EU Servers). Most of the stores offer you their help, or show you how to do this with a tutorial to follow.
STEAM GIFT : A Steam gift is a one-time transfer you receive. You activate and install The Last Remnant to play on Steam, it is a non-refundable game that stays in your Steam games collection. Please read the store description about any language or region restrictions.
STEAM CD KEY : Use the Steam Key Code on Steam Platform to download and play The Last Remnant. You must login to your Steam Account or create one for free. Download the (Steam Client HERE). Then once you login, click Add a Game (located in the bottom Left corner) -> Activate a Product on Steam. There type in your CD Key and the game will be activated and added to your Steam account game library.
Standard Edition
Compare Choose & Buy Download (710)

the only they told me here is to wait 2 days if they answer my ticket……..
didn’t know that i need to wait so long for a key that i have buy and PAY allready

Yes i understand you but you need to wait for an answer from the store, since they are the ones that have the order id and everything and can take actions like refund or replacement etc…

i buy this game from GJS kays and i want to report this shop cause i buy this game almost 10 hrs ago and i have pay with my card for the game Last remnanat and until now not only i don’t have the key but they DONT bother tou ansswer my ticket that i have open 10 hrs now .really allkeyshop check the shop that cooperate cause this shop GJS key is a fake shop that takes only the money from the customers

Ok i think you have contact our live support and they have assisted you and tell you what you can do.