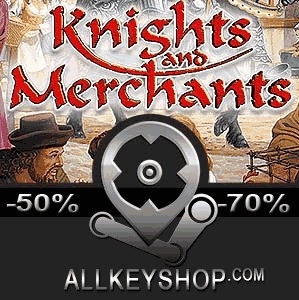 What is Knights and Merchants CD key?

It's a digital key that allows you to download Knights and Merchants directly to PC from the official Platforms.

How can I find the best prices for Knights and Merchants CD keys?

Allkeyshop.com compares the cheapest prices of Knights and Merchants on the digital downloads market to find the best sales and discount codes on trusted stores.

Knights and Merchants is a simulation and strategy video game developed by Joymania Entertainment and published by Topware Interactive.

Set in the middle ages, you will play as the head of the Palace Guards. In an unfortunate turn of events, a conspiracy against the king has placed you in tricky situation. You will be responsible for defending what’s left of the King’s shattered kingdom and gain back the territories that once belonged to him.

The game has two parts, first is The Shattered Kingdom where your goal is to win back the provinces that have been separated from the original kingdom. Devastating wars are waged with neighboring provinces and there is only chaos ruling the land. Figure out how you can win over the other provinces for the Kingdom to be united as one again.

Second part is The Peasants Rebellion, where you will have to create successful settlements that can live on its own, where you also must train and arm your troops and have them ready for war! Accomplishing the tasks would ensure peace and unity in the King’s land.

Be the hero and take up the task of rebuilding a fallen kingdom?

STEAM CD KEY : Use the Steam Key Code on Steam Platform to download and play Knights and Merchants. You must login to your Steam Account or create one for free. Download the (Steam Client HERE). Then once you login, click Add a Game (located in the bottom Left corner) -> Activate a Product on Steam. There type in your CD Key and the game will be activated and added to your Steam account game library.
STEAM GIFT : A Steam gift is a one-time transfer you receive. You activate and install Knights and Merchants to play on Steam, it is a non-refundable game that stays in your Steam games collection. Please read the store description about any language or region restrictions.
Standard Edition. Read the store description to know the content.
Special Edition. Read the store description to know the content.

Be the first one to write a review about Knights and Merchants !

An awesome game from “back in the days”.
I loved building a peaceful economy with its lovely sausage and bread production more than anything else in the game. I wanted to live there tasting all the glorious food.

The small details in this game is what made it so lovely.

Kinguin Store Seems it Make the most Games at Lowest Prices So I’d recommended to go and buy Knights and Merchants CD Key from them. Trusted and Fast

Looks like Kinguin has the game for the best price today.