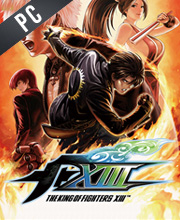 What is King Of Fighters 13 CD key?

It's a digital key that allows you to download King Of Fighters 13 directly to PC from the official Platforms.

How can I find the best prices for King Of Fighters 13 CD keys?

Allkeyshop.com compares the cheapest prices of King Of Fighters 13 on the digital downloads market to find the best sales and discount codes on trusted stores.

SNK Playmore has done it again! After releasing the action game, King of Fighters 12, the next part of the series comes with more advanced features and gameplay.

This part of the series begins when another tournament is sponsored by a mysterious character who is being controlled by “Those From The Past”, the organization behind the two prior tournaments that has been trying to break the demon Orochi’s seal and steal it’s ultimate power. The roster of The King of Fighters 13 includes all the characters who appeared in The King of Fighters 12, and a bunch of new cool casts from each teams.

It’s for you to discover who’s who. Rendered as a vastly enhanced version as this is no doubt SNK Playmore’s attempt to make a state-of-the-art survival fighting game that’s considered as one of gaming’s longest tenured franchises, and one of the most popular fighting brands out there and indeed succeeds.

King of Fighters 13 can easily make you just sit there and play for hours and hours without you noticing it. It’s more than just a fighting game and much better than King of Fighters XII, although that was lots of fun, too.

GOG.COM CD KEY : You need to register on Gog.com, then use the GOG Key to download and activate your game to play King of Fighters 13.
EU STEAM CD KEY: Requires an EUROPEAN IP address or you must activate it with a VPN (Virtual Private Network) in order to play King of Fighters 13. Might have languages restrictions or language packs. Read the description on the store game page to know if the EU IP is only needed for activation or for playing also (maybe on EU Servers). Most of the stores offer you their help, or show you how to do this with a tutorial to follow.
STEAM CD KEY : Use the Steam Key Code on Steam Platform to download and play King of Fighters 13. You must login to your Steam Account or create one for free. Download the (Steam Client HERE). Then once you login, click Add a Game (located in the bottom Left corner) -> Activate a Product on Steam. There type in your CD Key and the game will be activated and added to your Steam account game library.
Galaxy Edition
Standard Edition

This is a great game, but it is incorrectly listed as “King Of Fighters 13.” The correct title is “The King of Fighters XIII.” Anyway, this game led me to AllKeyShop and earned it my business.