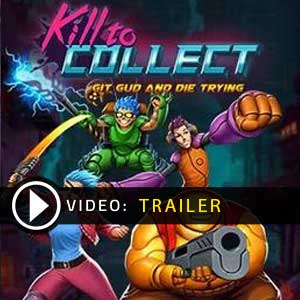 What is Kill to Collect CD key?

It's a digital key that allows you to download Kill to Collect directly to PC from the official Platforms.

How can I find the best prices for Kill to Collect CD keys?

Allkeyshop.com compares the cheapest prices of Kill to Collect on the digital downloads market to find the best sales and discount codes on trusted stores.

Kill to Collect is an action, adventure, indie video game developed and published by Pieces Interactive and is inspired by the 80’s cyberpunk.

The game is set in Geoshelter Alpha, the last known city in Earth, a dystopian and dangerous world. Bounty “Hunters” are hired to keep the peace in the lawless hostile slums. These “Hunters” know only one thing: to Kill to Collect.

There will be four “Hunters” to choose from. Each one will sport different fighting styles and abilities. The four warriors are: Kate Katana who wields a sword, Ivan Ironfist who depends on his bionic arms as weapons, Riot Ray a former Corp officer who specializes in defense and Shocking Shelly an amazing mechanic who uses her homemade biomata suit to fight.

Go about the game in its 3 game modes available: Story Campaign, Challenge Mode and Free Hunt Mode. Go through the game’s story in the Story Campaign Mode. The Challenge Mode will let you clear eight floors as fast as you can, a leader board is posted for those who will have the best time. Two challenges will be available as well: the Repeatable Challenges and the One Try Challenge. The Free Hunt Mode will let you hunt whoever bounty you feel like hunting removing the game’s story.

Kill to Collect can support up to 4 players co-op so call your friends to play and have the best time ever!

STEAM GIFT : A Steam gift is a one-time transfer you receive. You activate and install Kill to Collect to play on Steam, it is a non-refundable game that stays in your Steam games collection. Please read the store description about any language or region restrictions.
STEAM CD KEY : Use the Steam Key Code on Steam Platform to download and play Kill to Collect. You must login to your Steam Account or create one for free. Download the (Steam Client HERE). Then once you login, click Add a Game (located in the bottom Left corner) -> Activate a Product on Steam. There type in your CD Key and the game will be activated and added to your Steam account game library.
Bundle 1
Standard Edition