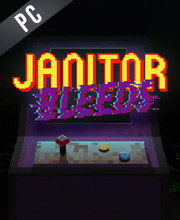 What is JANITOR BLEEDS CD key?

It's a digital key that allows you to download JANITOR BLEEDS directly to PC from the official Platforms.

How can I find the best prices for JANITOR BLEEDS CD keys?

There’s so much good going for Janitor Bleeds, creating plenty of scares with its well-executed main concept of having to play an arcade game while stalked by a mysterious entity. Sadly, there are some flaws. I do wish the ending had a bit more going for it, the main story only lasted about an hour, and the token system is woefully underused. Nonetheless, for the low price tag, fans of old-school horror games shouldn’t miss out on this little cabinet of spooks.

JANITOR BLEEDS provides a great first-person horror experience where you balance puzzle-solving with hiding from a pursuer who relentlessly hunts you down. The simple graphics and well-timed audio enhance the horror experience, making you dread the pursuit. However, the lack of a story is a missed opportunity that could have immersed the player in the game.

Zoom 1m 3m 1y All
Track product
GOG.COM CD KEY : You need to register on Gog.com, then use the GOG Key to download and activate your game to play JANITOR BLEEDS.
STEAM CD KEY : Use the Steam Key Code on Steam Platform to download and play JANITOR BLEEDS. You must login to your Steam Account or create one for free. Download the (Steam Client HERE). Then once you login, click Add a Game (located in the bottom Left corner) -> Activate a Product on Steam. There type in your CD Key and the game will be activated and added to your Steam account game library.
Standard Edition
Compare Choose & Buy Download (791)