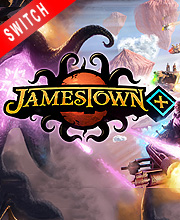 What is Jamestown Plus Game Code?

It's a digital key that allows you to download Jamestown Plus directly to Nintendo Switch directly from Nintendo eShop.

How can I find the best prices for Jamestown Plus on Nintendo Switch ?

Allkeyshop.com compares the cheapest prices of Jamestown Plus on the digital downloads market to find the best sales and discount codes on trusted stores.

Set in British colonial Mars in the 17th century, Jamestown+ offers an action, indie, shoot ’em up that can accommodate up to four players. Your mission is to protect the last Bastion of Britain – the Jamestown colony.

Jamestown+ sets out to be a well-made port on the Nintendo Switch, and it succeeds in every way. The game was great when it released eight years ago, and the same holds true today. It’s not often a game retains that kind of staying power, and this is one title that even casual players of action shmups should add to their collections.

Jamestown+ is a strange trip through space-age colonial times. Take control of several ships with dozens of optional load outs and protect Roanoke and Jamestown alongside John Smith from the allied forces of the Spanish and the Martians. While the premise may seem weird and hokey, the gameplay is solid, fun, and is sure to satisfy shoot’em up fans for hours with multiple difficulties, unlockable game modes, and additional challenge tiers.

Zoom 1m 3m 1y All
Track product
NINTENDO CODE : This is a digital code for Jamestown Plus. Use the download code on the Nintendo eShop of your Console. Once connected to the Nintendo eShop, you can enter and redeem the Download Code. Read carefully the store description about any language and region restrictions.
Standard Edition
Compare Choose & Buy Download (772)