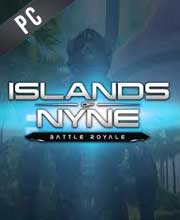 What is Islands of Nyne Battle Royale CD key?

It's a digital key that allows you to download Islands of Nyne Battle Royale directly to PC from the official Platforms.

How can I find the best prices for Islands of Nyne Battle Royale CD keys?

Allkeyshop.com compares the cheapest prices of Islands of Nyne Battle Royale on the digital downloads market to find the best sales and discount codes on trusted stores.

Islands of Nyne Battle Royale: Battle Royale is an action shooter video game. The game is published and developed by Define Human Studios.

This is a player versus player shooter game where players are dropped off randomly on the map. Once you land though, you must act quickly, find your weapon, ammo, armor, medkits, and mode of transport.

As with all Battle Royales, the last man standing is the winner. A continuously moving plasma wall will make sure that the space that you move in will get smaller and smaller. Players that touch this plasma wall will meet instant death.

Get to loot killed players, however, you must choose wisely what item to pick up since you only have a limited inventory.

Each match will have 100 players and each could last about 30 minutes, Players can also choose from 3 large-scale maps. To be fair, competitive matchmaking is available too.

Islands of Nyne Battle Royale offers multiple game modes, a player betting system as well as some skill based rewards.

Alpha: This product grants access ONLY to the game’s closed beta/alpha phase. The alpha is scheduled to run from 28th April 2017 and is available only on weekends. Beta/Alpha availability is subject to change at any time upon the developer’s decision.

STEAM CD KEY : Use the Steam Key Code on Steam Platform to download and play Islands of Nyne Battle Royale. You must login to your Steam Account or create one for free. Download the (Steam Client HERE). Then once you login, click Add a Game (located in the bottom Left corner) -> Activate a Product on Steam. There type in your CD Key and the game will be activated and added to your Steam account game library.
Early Access CD Key. Play before the release date.
Standard Edition. Read the store description to know the content.

Be the first one to write a review about Islands of Nyne Battle Royale !

I have to check out Islands of Nyne, they say that is really good!

The prices of this page are so cool!!, I love so munch games!!!

OMG another BR!
Nope…
What? Nope… Ok i am done. i dont like them.

Not a good game, but it currently has a really low price!