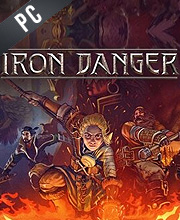 What is Iron Danger CD key?

It's a digital key that allows you to download Iron Danger directly to PC from the official Platforms.

How can I find the best prices for Iron Danger CD keys?

Allkeyshop.com compares the cheapest prices of Iron Danger on the digital downloads market to find the best sales and discount codes on trusted stores.

Iron Danger is an adventure, role-playing video game that is developed by Action Squad Studios and published by Daedalic Entertainment.

Take on the role of Kipuna, a village girl who has the ancient power that can grant dominion over time and death. You must learn to control your power as there is a war between the home of the humans, who rebelled against the gods and gave up their protection – the city of Kalevala and the Northlanders who are led by the witch queen Lowhee along with her armies.

You must use your power to protect mankind but you must also watch out as the enemies seek your power and are planning to use it to cause total destruction.

Offering unique time-rewind mechanics as well as tactical combat that is a mix of real-time and turn-based combat. Your environment is highly interactive, you must use this to your advantage. Get to fight with epic boss monsters and fulfill your destiny. No need to grind in the game, as the pace of character progression is based on the game’s story which means every fight is important.

Iron Danger will let you enjoy 15+ hours of adventure.

Zoom 1m 3m 1y All
Track product
GOG.COM CD KEY : You need to register on Gog.com, then use the GOG Key to download and activate your game to play Iron Danger.
EU STEAM CD KEY: Requires an EUROPEAN IP address or you must activate it with a VPN (Virtual Private Network) in order to play Iron Danger. Might have languages restrictions or language packs. Read the description on the store game page to know if the EU IP is only needed for activation or for playing also (maybe on EU Servers). Most of the stores offer you their help, or show you how to do this with a tutorial to follow.
EUROPEAN STEAM GIFT : It’s a steam gift for Europe which requires an European IP address to activate and to play Iron Danger on Steam. Read carefully the store description about region and language restrictions.
STEAM GIFT : A Steam gift is a one-time transfer you receive. You activate and install Iron Danger to play on Steam, it is a non-refundable game that stays in your Steam games collection. Please read the store description about any language or region restrictions.
STEAM CD KEY : Use the Steam Key Code on Steam Platform to download and play Iron Danger. You must login to your Steam Account or create one for free. Download the (Steam Client HERE). Then once you login, click Add a Game (located in the bottom Left corner) -> Activate a Product on Steam. There type in your CD Key and the game will be activated and added to your Steam account game library.
STEAM KEY ROW : It means for Rest Of the World countries which are not concerned by the region restrictions. This product can't be purchased and activated in Several countries. Please read the store description to know the full list of countries which are concerned. Use the key to Download and play Iron Danger on Steam.
Standard Edition
Compare Choose & Buy Download (772)