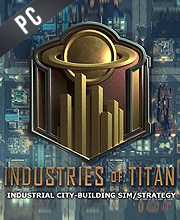 What is Industries of Titan CD key?

It's a digital key that allows you to download Industries of Titan directly to PC from the official Platforms.

How can I find the best prices for Industries of Titan CD keys?

Allkeyshop.com compares the cheapest prices of Industries of Titan on the digital downloads market to find the best sales and discount codes on trusted stores.

Industries of Titan is a simulation, strategy video game that is developed and published by Brace Yourself Games.

Set on Titan, one of Saturn’s Moons, players get to create a huge industrial city. Players are able to design and create a city starting with a few small buildings which you can develop into a huge and powerful Metropolis. Get to set up production lines inside your factories which will make raw resources into something that you can use.

Create an efficient economy and balancing everything like the needs of your workers, your buildings and your factories. Once your massive empire is built, produce battleships with thrusters, shields, and weapons.

Stake your claim on the Industries of Titan by doing battle with the other Great Houses of Titan. To be the most powerful Metropolis, you must be good at tactical battleship combat, political influence and brilliant in technologies.

Play at your own pace as the game is “real-time with pause”.

EPIC GAMES KEY : Region Free / Worldwide. Requires Epic Games Launcher App in order to play the game. You need to create a free account here in order to download Industries of Titan from Epic Plateform . Read the description on the store page about any language or country restrictions.
EU STEAM CD KEY: Requires an EUROPEAN IP address or you must activate it with a VPN (Virtual Private Network) in order to play Industries of Titan. Might have languages restrictions or language packs. Read the description on the store game page to know if the EU IP is only needed for activation or for playing also (maybe on EU Servers). Most of the stores offer you their help, or show you how to do this with a tutorial to follow.
EUROPEAN STEAM GIFT : It’s a steam gift for Europe which requires an European IP address to activate and to play Industries of Titan on Steam. Read carefully the store description about region and language restrictions.
STEAM GIFT : A Steam gift is a one-time transfer you receive. You activate and install Industries of Titan to play on Steam, it is a non-refundable game that stays in your Steam games collection. Please read the store description about any language or region restrictions.
STEAM CD KEY : Use the Steam Key Code on Steam Platform to download and play Industries of Titan. You must login to your Steam Account or create one for free. Download the (Steam Client HERE). Then once you login, click Add a Game (located in the bottom Left corner) -> Activate a Product on Steam. There type in your CD Key and the game will be activated and added to your Steam account game library.
Early Access
Standard Edition