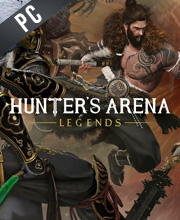 It's a digital key that allows you to download Hunter’s Arena Legends directly to PC from the official Platforms.

How can I find the best prices for Hunter’s Arena Legends CD keys?

Allkeyshop.com compares the cheapest prices of Hunter’s Arena Legends on the digital downloads market to find the best sales and discount codes on trusted stores.

Hunter’s Arena Legends is a melee-focused battle royal game developed by Korean studio Mantisco. You are a part of a global organization of loosely aligned individuals called hunters, the organization’s purpose is to hunt down demons all over the world, for a while they were successful and managed to achieve lasting peace, until that is when one of their own betrayed them and set the demons loose on the world once again, with the pressure of not knowing who the traitor is the fragile alliance crumbles, culminating in a battle at the epicenter of the invasion, only one hunter may survive this onslaught.

All things considered, Hunter’s Arena: Legends is definitely a battle royale game that fans should check out, with enough of its own identity to seriously contend for people’s time in an increasingly crowded genre of quality options.

EUROPEAN STEAM GIFT : It’s a steam gift for Europe which requires an European IP address to activate and to play Hunter’s Arena Legends on Steam. Read carefully the store description about region and language restrictions.
STEAM GIFT : A Steam gift is a one-time transfer you receive. You activate and install Hunter’s Arena Legends to play on Steam, it is a non-refundable game that stays in your Steam games collection. Please read the store description about any language or region restrictions.
STEAM CD KEY : Use the Steam Key Code on Steam Platform to download and play Hunter’s Arena Legends. You must login to your Steam Account or create one for free. Download the (Steam Client HERE). Then once you login, click Add a Game (located in the bottom Left corner) -> Activate a Product on Steam. There type in your CD Key and the game will be activated and added to your Steam account game library.
Standard Edition
Compare Choose & Buy Download (743)