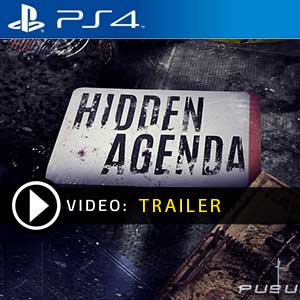 What is Hidden Agenda Game Code?

It's a digital key that allows you to download Hidden Agenda directly to Playstation 4 from PSN (Playstation network).

Allkeyshop.com compares the cheapest prices of Hidden Agenda on the digital downloads market to find the best sales and discount codes on trusted stores.

Hidden Agenda is an action–adventure video game that is developed by Supermassive Games and published by SIEE.

Play as either homicide detective Becky Marney or district attorney Felicity Graves who are both after the serial killer called the Trapper. The Trapper is a heartless murderer who sets up traps on the bodies of his victims in order to kill or hurt the first responders.

The game can be played two ways with either the Story Mode or the Competition Mode. The Story Mode will have five players working together in the investigation, where one player would be voted to make the big decisions for the group in finding out who the killer really is. In the Competition Mode, there will be two to six players where one of the players will be sent a ‘hidden agenda’ that would have to be accomplished in secret. No one in the group must know that you are conspiring against them.