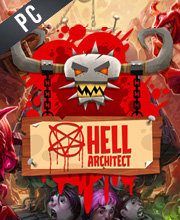 What is Hell Architect CD key?

It's a digital key that allows you to download Hell Architect directly to PC from the official Platforms.

How can I find the best prices for Hell Architect CD keys?

Allkeyshop.com compares the cheapest prices of Hell Architect on the digital downloads market to find the best sales and discount codes on trusted stores.

Create your own hell! Get to build your hell by adding the foundations first like power stations, toilets, canteens then go on to the more exciting side of things, the torture devices. You will also be managing your hell by taking care of the sinners, growing your population, gathering resources and many more.

Hell Architect makes the macabre somehow a bit more palatable with its devilishly cute art style and relatively lighthearted dark humor. Although fans of similar titles like Oxygen Not Included will likely have their interest piqued, the selling point of Hell Architect isn’t in its gameplay, but in its theme.

Hell Architect shines in its narration, comedic dialogue, and dark humor along with its excellent graphics and design. Hell Architect is a cool concept and executed well. There are certainly fun times to be had while managing hell, however the biggest issue comes in the fact that there’s little purpose to playing the game in the long run. The processes can become stale quickly and outside the Scenarios, the Sandbox Mode may only entice the most enthusiastic of the colony sim fans.

The Pay-To-Stay Bundle will have players test their landlording skills with two games.

The Countryball From Hell Bundle comes with two games which are:

The Definitive Edition comes with the base game plus some goodies.

Zoom 1m 3m 1y All
Track product
GOG.COM CD KEY : You need to register on Gog.com, then use the GOG Key to download and activate your game to play Hell Architect.
EUROPEAN STEAM GIFT : It’s a steam gift for Europe which requires an European IP address to activate and to play Hell Architect on Steam. Read carefully the store description about region and language restrictions.
STEAM GIFT : A Steam gift is a one-time transfer you receive. You activate and install Hell Architect to play on Steam, it is a non-refundable game that stays in your Steam games collection. Please read the store description about any language or region restrictions.
STEAM CD KEY : Use the Steam Key Code on Steam Platform to download and play Hell Architect. You must login to your Steam Account or create one for free. Download the (Steam Client HERE). Then once you login, click Add a Game (located in the bottom Left corner) -> Activate a Product on Steam. There type in your CD Key and the game will be activated and added to your Steam account game library.
Leonardo Interactive Bundle
Standard Edition
Compare Choose & Buy Download (803)