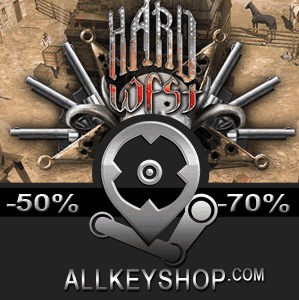 What is Hard West CD key?

It's a digital key that allows you to download Hard West directly to PC from the official Platforms.

How can I find the best prices for Hard West CD keys?

Allkeyshop.com compares the cheapest prices of Hard West on the digital downloads market to find the best sales and discount codes on trusted stores.

Welcome to the Old West as you’ve never seen it before. When tragic events push a man to choose the path of chaos, he begins to track down those who have wronged him. This is when you follow Warren in his vengeance, you discover his dark thoughts and will try to survive in a world where every choice is difficult and have heavy consequences.

Because in this world, death is something to keep in mind as you weigh on the threat, but you will also make pacts with forces that defy human understanding which will aim to haunt all those around you. You will encounter eight scenarios, each with a different history and attempt your luck at more than 40 distinguished missions.

Using all these companions, you will have the relevant choice to discover the plans of the old powers of this world, as you will have to unravel a deep storyline with multiple endings that will be based on the choices you make in the process of adventure. An adventure game where exploration will keep you alert and you’ll be the cowboy who will make his way in this world.

GOG.COM CD KEY : You need to register on Gog.com, then use the GOG Key to download and activate your game to play Hard West.
PUBLISHER WEBSITE CD KEY: Use the CD Key Code to download directly on the Official Website or from the store to play Hard West. Follow the instructions given by the store. Verify languages available and possible region restrictions before buying.
STEAM GIFT : A Steam gift is a one-time transfer you receive. You activate and install Hard West to play on Steam, it is a non-refundable game that stays in your Steam games collection. Please read the store description about any language or region restrictions.
STEAM CD KEY : Use the Steam Key Code on Steam Platform to download and play Hard West. You must login to your Steam Account or create one for free. Download the (Steam Client HERE). Then once you login, click Add a Game (located in the bottom Left corner) -> Activate a Product on Steam. There type in your CD Key and the game will be activated and added to your Steam account game library.
Collector Edition
Complete Edition
Standard Edition

Thank you Allkeyshop for this game, just bought it thanks to your Gift Card. The game itself is quite good. Native to Linux (although not perfect port), nice story, and not bad gameplay. For 1.45€ it was a worthy buy.

If you like Turn based tactical games with rich story line in a unique environment this is your games.
A wonderful graphics with a cool story!

gamesrocket .com is the best store to buy Hard West .

G2A, trusted dealers. I’ve bought a few keys from them without any problem

Gog.com is the Best site to buy this awesome game. Because you can download it very fast.