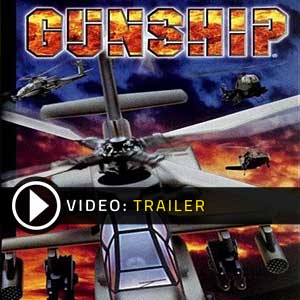 What is Gunship! CD key?

It's a digital key that allows you to download Gunship! directly to PC from the official Platforms.

How can I find the best prices for Gunship! CD keys?

Allkeyshop.com compares the cheapest prices of Gunship! on the digital downloads market to find the best sales and discount codes on trusted stores.

Gunship! is an AH-64 Apache helicopter combat flight simulator videogame that was developed and released by MicroProse.

Featuring several epic missions in seven regions, including the USA, Southeast Asia, Central America, Middle East and Western Europe, immerse yourself into the midst of the WWIII as the point man and helicopter pilot. After selecting a region, as well as style and enemies, you will be assigned in primary and  secondary missions. The objectives include “Destroy enemy headquarters” or “Support friendly troops“.

Be part of the new air mobility tactic with helicopter Gunship! It is heavily used as the most devastating weapon in the inventory of war. It offers an advanced flight simulation that will surely give the you an unforgettable war experience. You could even feel all the forces affecting the pilot body with the pilot head  which could only found in high-end flight simulators.

This game will definitely surprise you. Brings back lots of memories yet it still has a lot of WOW to it. Does provide quite a pop in fun factor, a zoom in the adrenaline sector, and lands with a pow!

Zoom 1m 3m 1y All
Track product
GOG.COM CD KEY : You need to register on Gog.com, then use the GOG Key to download and activate your game to play Gunship!.
STEAM CD KEY : Use the Steam Key Code on Steam Platform to download and play Gunship!. You must login to your Steam Account or create one for free. Download the (Steam Client HERE). Then once you login, click Add a Game (located in the bottom Left corner) -> Activate a Product on Steam. There type in your CD Key and the game will be activated and added to your Steam account game library.
Standard Edition
Compare Choose & Buy Download (743)