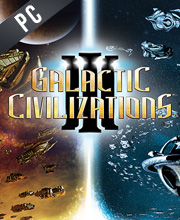 What is Galactic Civilizations 3 CD key?

It's a digital key that allows you to download Galactic Civilizations 3 directly to PC from the official Platforms.

How can I find the best prices for Galactic Civilizations 3 CD keys?

Allkeyshop.com compares the cheapest prices of Galactic Civilizations 3 on the digital downloads market to find the best sales and discount codes on trusted stores.

Dubbed as the largest strategy sandbox game ever made, the game can be played either in single player, or in multiplayer with 3 other players.

The game promises that players won’t have to play the same game twice as each game has its own unique map, worlds, and challenges. It also includes a story-based campaign which brings players on the 20-year story arc behind the rise of humanity in the 23rd century.

With its massive techniology tree, you also get to research a technology immensely and choose what your civilization’s capabilities are. You also have total control over your starship’s functions and customzie how they look. Create any ship you can imagine and get to download them, too!

Speaking of ships, your starship can be assigned specific roles to play when it comes to combat. View fleet battles in a cinematic style, and see your starship designs in action!

Watch your civilization rise, and put your strategy-making skills to the test with the strategy–simulation game Galactic Civilizations 3!

Zoom 1m 3m 1y All
Track product
EPIC GAMES KEY : Region Free / Worldwide. Requires Epic Games Launcher App in order to play the game. You need to create a free account here in order to download Galactic Civilizations 3 from Epic Plateform . Read the description on the store page about any language or country restrictions.
GOG.COM CD KEY : You need to register on Gog.com, then use the GOG Key to download and activate your game to play Galactic Civilizations 3.
EU STEAM CD KEY: Requires an EUROPEAN IP address or you must activate it with a VPN (Virtual Private Network) in order to play Galactic Civilizations 3. Might have languages restrictions or language packs. Read the description on the store game page to know if the EU IP is only needed for activation or for playing also (maybe on EU Servers). Most of the stores offer you their help, or show you how to do this with a tutorial to follow.
STEAM GIFT : A Steam gift is a one-time transfer you receive. You activate and install Galactic Civilizations 3 to play on Steam, it is a non-refundable game that stays in your Steam games collection. Please read the store description about any language or region restrictions.
STEAM CD KEY : Use the Steam Key Code on Steam Platform to download and play Galactic Civilizations 3. You must login to your Steam Account or create one for free. Download the (Steam Client HERE). Then once you login, click Add a Game (located in the bottom Left corner) -> Activate a Product on Steam. There type in your CD Key and the game will be activated and added to your Steam account game library.
Windows 10 Global : This is an Worldwide Microsoft code to play on PC for Worldwide . You need to have installed Windows 10 Anniversary Edition update on your PC. Log into your Microsoft account to download and play. Read closely the description given by the store to activate your game.
Bundle
Core Edition
Gold Edition
Limited Special Edition
Special Edition
Standard Edition
Ultimate Edition
Compare Choose & Buy Download (759)

galactic civ 2 was really good, the third game of the series looks really hot, havent got it yet but i can still recommend the game

it seems like a nice game but it ain’t really my style of play.
i hate Space!!
sorry ’bout that.

seems a very great promise, this game.
gonna check it out

I’ve checked some videos and descriptions and looks like this one might be a very good game!