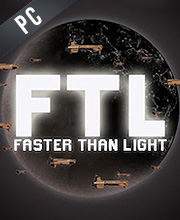 What is FTL Faster Than Light CD key?

It's a digital key that allows you to download FTL Faster Than Light directly to PC from the official Platforms.

How can I find the best prices for FTL Faster Than Light CD keys?

Allkeyshop.com compares the cheapest prices of FTL Faster Than Light on the digital downloads market to find the best sales and discount codes on trusted stores.

At the heart of the galaxy, the player must pilot his ship from one point to another by combining management, strategy and skill to deal with space hazards, such as asteroids or the pirates!

From a Kickstarter project, the game received a budget largely beyond expectations, and was able use the money wisely. Returning to the game, you will need to make trips into space, choosing your route in advance, and thus set you course keeping in mind if you are going through more or less hostile environments.

With an ingenious and very rich gameplay and a well thought out interface, you will quickly take control of your ship and become addicted to your space journeys!

The life of the game is good thanks to the end boss being particularly tough and very important replayable.

Be prepared with FTL: Faster than Light living the most desperate situation, fire in the engine compartment, oxygen loss, shock asteroid … or all three at once!

Zoom 1m 3m 1y All
Track product
EPIC GAMES KEY : Region Free / Worldwide. Requires Epic Games Launcher App in order to play the game. You need to create a free account here in order to download FTL Faster Than Light from Epic Plateform . Read the description on the store page about any language or country restrictions.
GOG.COM CD KEY : You need to register on Gog.com, then use the GOG Key to download and activate your game to play FTL Faster Than Light.
EU STEAM CD KEY: Requires an EUROPEAN IP address or you must activate it with a VPN (Virtual Private Network) in order to play FTL Faster Than Light. Might have languages restrictions or language packs. Read the description on the store game page to know if the EU IP is only needed for activation or for playing also (maybe on EU Servers). Most of the stores offer you their help, or show you how to do this with a tutorial to follow.
EUROPEAN STEAM GIFT : It’s a steam gift for Europe which requires an European IP address to activate and to play FTL Faster Than Light on Steam. Read carefully the store description about region and language restrictions.
STEAM GIFT : A Steam gift is a one-time transfer you receive. You activate and install FTL Faster Than Light to play on Steam, it is a non-refundable game that stays in your Steam games collection. Please read the store description about any language or region restrictions.
STEAM CD KEY : Use the Steam Key Code on Steam Platform to download and play FTL Faster Than Light. You must login to your Steam Account or create one for free. Download the (Steam Client HERE). Then once you login, click Add a Game (located in the bottom Left corner) -> Activate a Product on Steam. There type in your CD Key and the game will be activated and added to your Steam account game library.
Windows 10 Global : This is an Worldwide Microsoft code to play on PC for Worldwide . You need to have installed Windows 10 Anniversary Edition update on your PC. Log into your Microsoft account to download and play. Read closely the description given by the store to activate your game.
Advanced Edition
Standard Edition
Compare Choose & Buy Download (803)

Best game of all times. Not for everyone, but still…