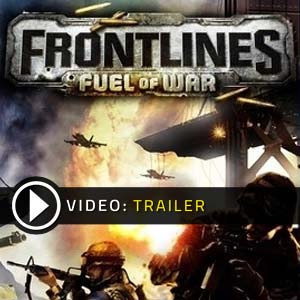 What is Frontlines Fuel of War CD key?

It's a digital key that allows you to download Frontlines Fuel of War directly to PC from the official Platforms.

How can I find the best prices for Frontlines Fuel of War CD keys?

Allkeyshop.com compares the cheapest prices of Frontlines Fuel of War on the digital downloads market to find the best sales and discount codes on trusted stores.

Frontlines: Fuel of War is a first-person shooter game for Microsoft Windows and Xbox 360 developed by Kaos Studios.

Set in the near future where the global natural resources are on the verge of decimation, players assume the role of an elite soldier in the Western Coalition Army tasked to fight against he Red Star Alliance to control the last of the world’s oil reserves. Experience a thrilling and intense combat in both single player and multiplayer modes.

Customize your character in a way to represent your play style through character choices and role specialization, join the forces on the frontline, take advantage of over 60 next generation vehicles and weapons inspired by military designs of the near future and most importantly, lead your own path to victory.

The creative minds behind Kaos Studios managed to create a game that nicely satisfies both personal single player and multiplayer-shooter-likings. New ideas, uncountable and well balanced possibilities, awesome graphics, cool vehicles, nice maps for up to 64 shooter fans via LAN and an overall epic gameplay mechanics.

PUBLISHER WEBSITE CD KEY: Use the CD Key Code to download directly on the Official Website or from the store to play Frontlines Fuel of War. Follow the instructions given by the store. Verify languages available and possible region restrictions before buying.
STEAM GIFT : A Steam gift is a one-time transfer you receive. You activate and install Frontlines Fuel of War to play on Steam, it is a non-refundable game that stays in your Steam games collection. Please read the store description about any language or region restrictions.
STEAM CD KEY : Use the Steam Key Code on Steam Platform to download and play Frontlines Fuel of War. You must login to your Steam Account or create one for free. Download the (Steam Client HERE). Then once you login, click Add a Game (located in the bottom Left corner) -> Activate a Product on Steam. There type in your CD Key and the game will be activated and added to your Steam account game library.
Standard Edition