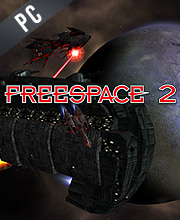 What is Freespace 2 CD key?

It's a digital key that allows you to download Freespace 2 directly to PC from the official Platforms.

How can I find the best prices for Freespace 2 CD keys?

Allkeyshop.com compares the cheapest prices of Freespace 2 on the digital downloads market to find the best sales and discount codes on trusted stores.

Developed by Voliton, FreeSpace 2 is a 3D space craft action simulator and is the sequel to Descent: FreeSpace – The Great War.

The first part was just a warm up. In FreeSpace 2, the Theran-Vasudan Alliance is restoring its forces decades after the Great War until the upcoming return of the Shivans.

Decades after the war that lost both race’s homeworlds, the new Galactic Theran-Vasudan Alliance is rebuilding its forces, up until the the discovery of an extremely ancient Jump Node, and the return of the Shivans.

Once more, the story is told in every in-game events and mission briefings while you play as a rookie piloting a Starfighter filled with ammunition and weapons to destroy enemy ships and defend the Human race and your alien allies, the Vasudans. Unveil the lore and origins of the mysterious Shivans along the way.

What makes it interesting is that this game has improved a lot when it comes to resolution, technological advancement of shield, firepower, and options.

Still the best singleplayer space combat sim out there. This game was basically nostalgic, can’t really describe how much fun this game is. Story is deep, meaningful, and full of mysteries.

Zoom 1m 3m 1y All
Track product
GOG.COM CD KEY : You need to register on Gog.com, then use the GOG Key to download and activate your game to play Freespace 2.
STEAM CD KEY : Use the Steam Key Code on Steam Platform to download and play Freespace 2. You must login to your Steam Account or create one for free. Download the (Steam Client HERE). Then once you login, click Add a Game (located in the bottom Left corner) -> Activate a Product on Steam. There type in your CD Key and the game will be activated and added to your Steam account game library.
Standard Edition
Compare Choose & Buy Download (772)

this is a good game in which you can fly a aircraft and kill enemy’s with it and looks like a good game to play.

For this small price…it`s worth the buy looks good.

very small price, i cant lose anything to buy it 😀

Havent tried it myself, but for this cheap price i think its worth buying.