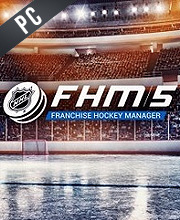 It's a digital key that allows you to download Franchise Hockey Manager 5 directly to PC from the official Platforms.

How can I find the best prices for Franchise Hockey Manager 5 CD keys?

Allkeyshop.com compares the cheapest prices of Franchise Hockey Manager 5 on the digital downloads market to find the best sales and discount codes on trusted stores.

Franchise Hockey Manager 5 is a sports simulation strategy game published and developed by Out of the Park Developments. This is the only sports strategy game that has been licensed by the NHL ®, including the real clubs, awards, and trophies associated with the world’s greatest hockey league. The game awards you the ability to build you own hockey business so as to ensure you win the Stanley cup in you own way.

The game also gives you a lot of jurisdiction over how your team performs with deep tactics that can affect individual players on the team. The user interface has also been updated to make it a lot easier to navigate.

There is a new system that puts weight on team chemistry, in that some player comps will work better together which adds another degree of depth to the game.

Player personality now has an impact on how well a team performs.

There is also a new online league that allows you to play against other players in many global competitions and tournaments.

The game was released on October 5, 2018 for PC and is attainable through Steam.

Bundle: Out of the Park Baseball 19 + Franchise Hockey Manager 5

STEAM CD KEY : Use the Steam Key Code on Steam Platform to download and play Franchise Hockey Manager 5. You must login to your Steam Account or create one for free. Download the (Steam Client HERE). Then once you login, click Add a Game (located in the bottom Left corner) -> Activate a Product on Steam. There type in your CD Key and the game will be activated and added to your Steam account game library.
Standard Edition. Read the store description to know the content.

Be the first one to write a review about Franchise Hockey Manager 5 !