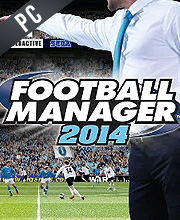 What is Football Manager 2014 CD key?

It's a digital key that allows you to download Football Manager 2014 directly to PC from the official Platforms.

How can I find the best prices for Football Manager 2014 CD keys?

Allkeyshop.com compares the cheapest prices of Football Manager 2014 on the digital downloads market to find the best sales and discount codes on trusted stores.

Football Manager 2014 (commonly called FM14) is a football management simulation video game developed by Sports Interactive and published by Sega. On the surface this game might just look like a collection of visually enhanced excel sheets, but under the numbers and tables you find a lot of personality and so much more! This is a gem from soccer fans for soccer fans.

Football Manager 2014 comes with hundreds of new features related to all the aspects of a game that each year makes its players feel more and more like a Special One. Football Manager is by far the most realistic, in-depth and addictive simulation of football management available in the market, putting you in the position of almost any club in more than 50 countries across the world, including all of Europe’s biggest leagues. FM14 offers quite a lot of changes and developments; everything from the 3D matches to the interface, gameplay and responsiveness.

Sports Interactive confirmed and enhanced the extraordinary work done the previous year, making Football Manager 2014 the almost-perfect game for all the Ferguson wannabes out there. And if they keep making this game so good, in a couple of years this might end up to be an 11/10. Certainly a great pickup for football fans everywhere!

STEAM CD KEY : Use the Steam Key Code on Steam Platform to download and play Football Manager 2014. You must login to your Steam Account or create one for free. Download the (Steam Client HERE). Then once you login, click Add a Game (located in the bottom Left corner) -> Activate a Product on Steam. There type in your CD Key and the game will be activated and added to your Steam account game library.
EU STEAM CD KEY: Requires an EUROPEAN IP address or you must activate it with a VPN (Virtual Private Network) in order to play Football Manager 2014. Might have languages restrictions or language packs. Read the description on the store game page to know if the EU IP is only needed for activation or for playing also (maybe on EU Servers). Most of the stores offer you their help, or show you how to do this with a tutorial to follow.
STEAM KEY ROW : It means for Rest Of the World countries which are not concerned by the region restrictions. This product can't be purchased and activated in Several countries. Please read the store description to know the full list of countries which are concerned. Use the key to Download and play Football Manager 2014 on Steam.
STEAM GIFT : A Steam gift is a one-time transfer you receive. You activate and install Football Manager 2014 to play on Steam, it is a non-refundable game that stays in your Steam games collection. Please read the store description about any language or region restrictions.
Standard Edition. Read the store description to know the content.

Be the first one to write a review about Football Manager 2014 !

i have one question, so it will be great if I get some response from you on that question.
So, I’m from Croatia and I’m buying for the first time FM online.
So, if I buy FM on fast2play, i will download game from the net(i will recive some link to download game) and I will recive key for online playing?

No they’ll send you via email a print of the cd key so you can activate it on steam and download it from there.

I totally agree with you! Really love it!